Until we can welcome you back to the castle, our guides are telling their favourite tales from the castle’s history. This week, our guide Tricia follows the story of a fatal invitation to the castle.

Stirling Castle has plenty of legends that have endured over the centuries and every one of the guides here at the Castle has their favourite. My favourite is also one of the most gruesome tales, and it happened in my favourite part of the Castle – The Douglas Gardens.

It is a story of ambition, power, greed, and betrayal that ends in a brutal act. With a plot worthy of a Shakespearean play, it is said to be the inspiration for the Red Wedding in George R R Martin’s Game of Thrones.

On 22 February 1452, King James II of Scotland was responsible for the murder of his most powerful earl: William, 8th Earl of Douglas. To understand James II’s motives, we must examine who the Douglas clan were, how they became so powerful and why the king saw them as a direct threat to his rule. 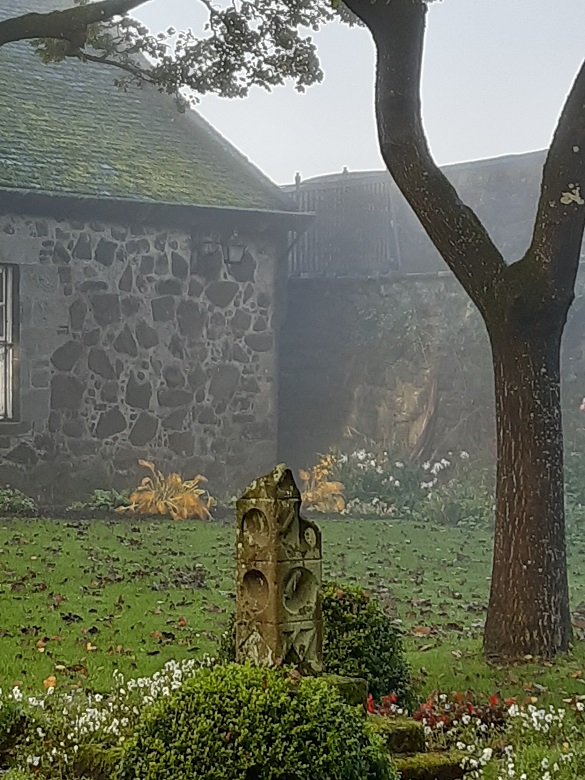 The Rise to Power

The connection between the Douglases and the Kings of Scotland goes back to Robert the Bruce. Sir James Douglas was Bruce’s most trusted friend, a fellow knight who fought alongside him at Bannockburn. As King Robert lay dying, it was “The Good Sir James” that he asked to carry his heart on Crusade. James Douglas was killed fighting the Moors in Spain while carrying out this task. However, it was with the Stewart dynasty that the Douglas Earls began to become entrenched in the Royal Court.

King Robert II made the nephew of The Good Sir James the first Earl of Douglas. His son married Isabel, the granddaughter of the first of the Stewart kings. Within forty years, the Douglases became the largest landowners in Scotland and Tenant in Chief to the Crown. 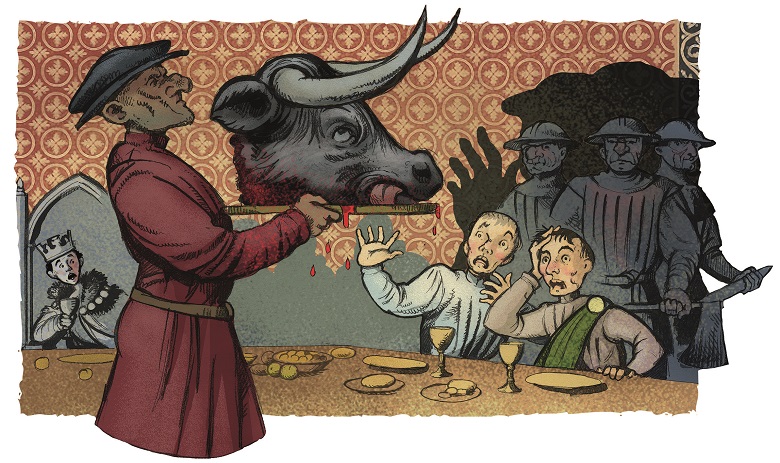 An artist’s impression of the Black Dinner

The Earls of Douglas made great use of their connections, judicious marriages, and alliances to further their position. However, there were those amongst them who were not averse to a bit of murder to get their hands on the title.

In 1440, William, 6th Earl of Douglas and only a young man, was invited up to Edinburgh Castle to dine with King James II, who was just a boy at the time. Against all advice, William and Sir William Fleming attended the meal, but at the end a black bull’s head was brought out. A sign of death. William and Fleming were arrested, tried, and beheaded on Castle Hill. Many believe it was the young Earl’s uncle, James the Gross, who was responsible. He inherited the title and the Douglas lands were not forfeited to the King, which is what normally happened in the case of treason.

This ruthless reputation was also seen in Douglas successes on the battlefield. They fought for the French at the Battle of Poitiers 1356 and with rebel northern English Barons. The 4th Earl has the honour of being mentioned in Shakespeare’s Henry IV. He also provided 6500 men to the French army and was rewarded with the Earldom of Touraine and title of Lieutenant General of France.

So, is it any wonder that when James II needed champions to compete in a tournament to defend the honour of Scotland it was to the Douglas family he turned to?!

In 1449, Phillip, Duke of Burgundy was in talks with James II to arrange a match between his niece Mary of Guelders and the King. A tournament took place in the fields below the Ladies Lookout of Stirling Castle with two members of the Douglas clan as champions of Scotland facing two Burgundian knights. It was a close, well fought tournament and showed that the Scots were an able match for the best Burgundy could offer. The marriage with Mary and her dowry of thirty thousand marks was secured.

However, this is where James II’s troubles got worse. 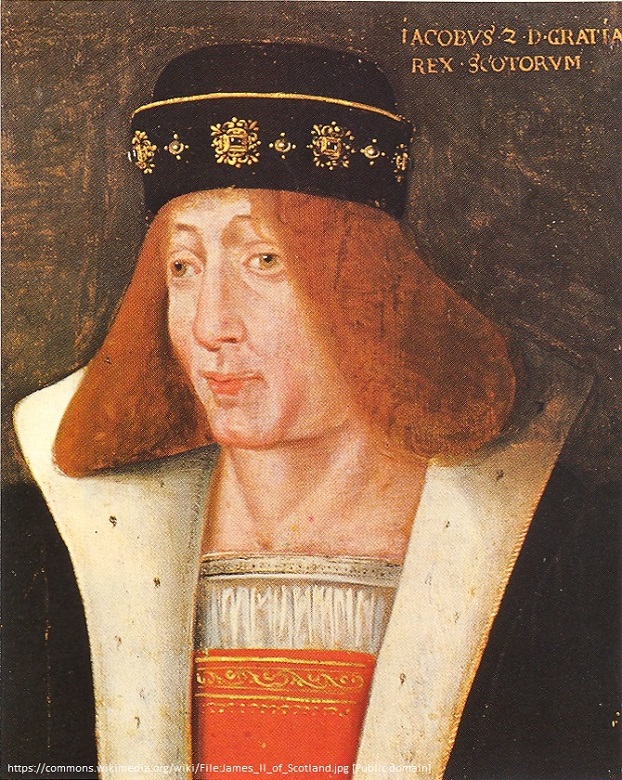 James was very keen on the marriage with Mary of Guelders, not only because of the connections and support it would bring him in Europe, but because he needed the money. The marriage, however, was a costly affair. Before Philip of Burgundy would release the first tranche of the dowry, James had to bestow lands and titles on his new bride that would provide her with five thousand pounds a year. Struggling to raise this. James decided to go after the next richest of his subjects – the Livingstones.  He arrested Robert of Linlithgow on convenient, trumped up charges, had him beheaded and his lands and titles forfeited to the Crown.

Next, he set his sight on William 8th Earl of Douglas. William was on a pilgrimage to Rome where he was being feted like royalty. James II stripped him of his titles and razed Castle Douglas to the ground. You might think this would have been the end of the powerful Douglases, but James had moved too soon and shown his hand too early. By the time of his return to Scotland in 1451, William had, by various legal moves, managed to regain most of his titles.

James’ attack against the Douglases did not frighten William. On the contrary, it emboldened him to try and secure support in the event he decided to move against the King. He formed an alliance with two of the most powerful men in Scotland: the Earl of Crawford, known as the Tiger Earl, who ruled in the North East and the Earl of Ross. The Earl of Ross was head of the MacDonald clan, his other title was Lord of the Isles and he could trace his ancestry back to Viking times. These men were as powerful as kings in their own lands and they saw James II as a lowland king with no authority to dictate how they ran their lands and affairs.

James knew that he had to split this alliance. He invited William to join him at Stirling Castle for feasting on Shrove Tuesday, 1452. 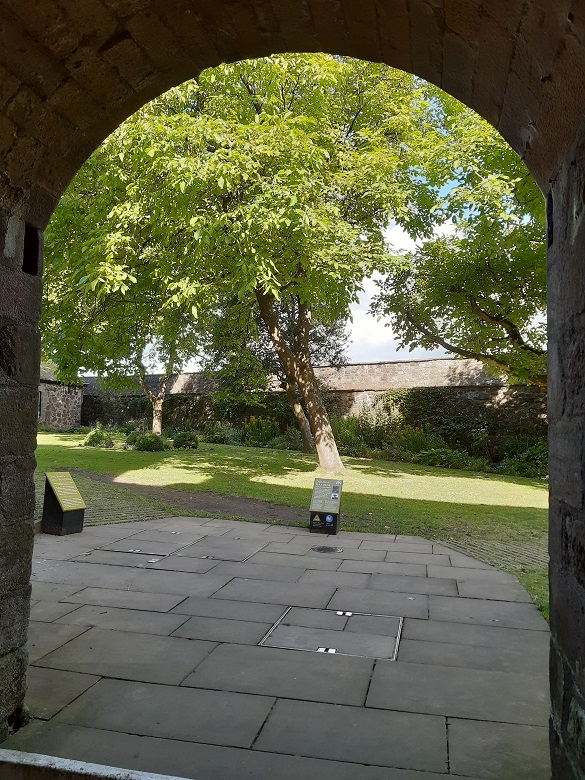 William was issued with a letter of safe conduct and joined the King for the feasting before the start of Lent. There was no political discussion that night. The next day was when James II approached the subject of the Douglas’ bond with Crawford and Ross. He asked William to break it. He responded saying “I might no, I will no.” The King replied,

false traitor, since you will not, I shall”

He stabbed William in the neck and the shoulder twenty-six times. Sir Patrick Grey then ‘struck him with a poleax and struck out his brain.’ William’s body was then unceremoniously flung out the window into the garden below.

In response, the Douglas clan marched on Stirling with the letters of safe conduct pinned to a horse’s tail and disavowed their oath to James. The months of conflict that followed was tantamount to civil war. James II kept hold of the Crown and the Stewart dynasty would continue. 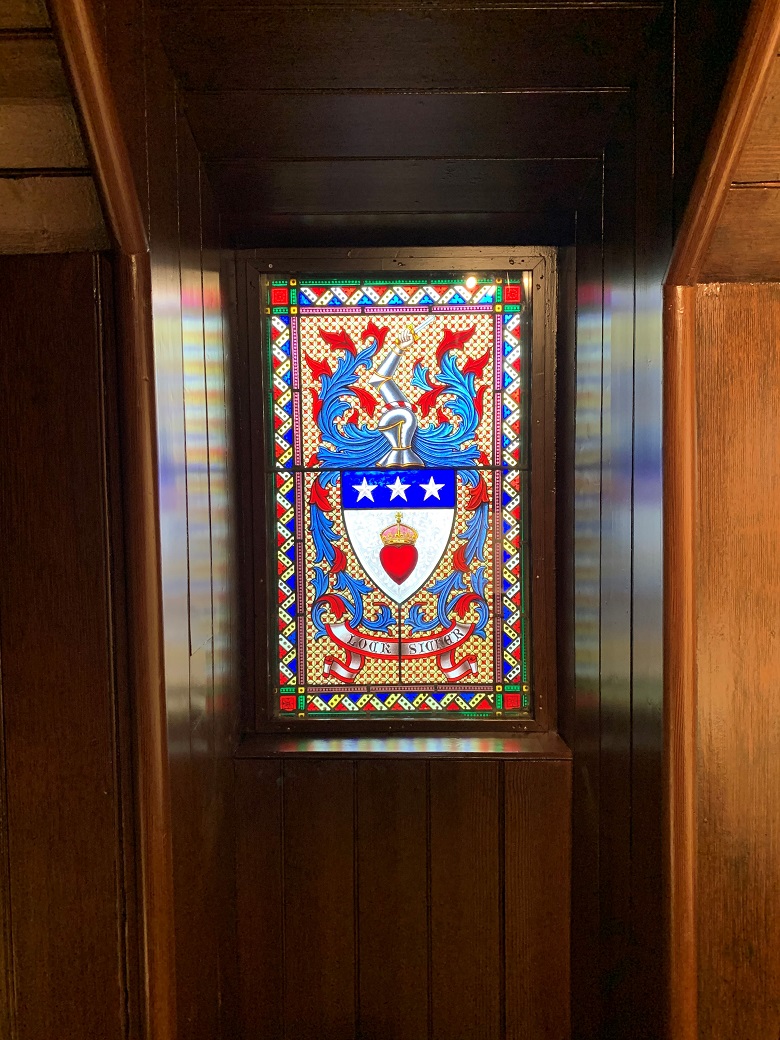 It is perhaps ironic that the most peaceful and beautiful part of the Castle is the site of such a violent crime.  The murder of the Earl of Douglas was as heinous an act as Robert the Bruce’s stabbing of his rival the Red Comyn in the Greyfriars Kirk. An act that went against all laws of the land, of the Church and of hospitality.

If you visit Stirling Castle you will see a window just above the archway in the Douglas Garden which is known as The Douglas Window. You may marvel that anyone was able to throw a body out of that small window.  However, the King’s Old Building was rebuilt in 1496 and the end near the garden was restored after a fire in 1855. The Victorian window we see today was perhaps a curiosity for officers of the regiment to come and wonder at this most dastardly deed while partaking of their after-dinner port and cigars!