HM The Queen at Stirling Castle

Following the news of HM The Queen’s death at Balmoral Castle last week, we are looking back at the monarch’s visits to Scotland. On more than one occasion, her visits led her to Stirling Castle. 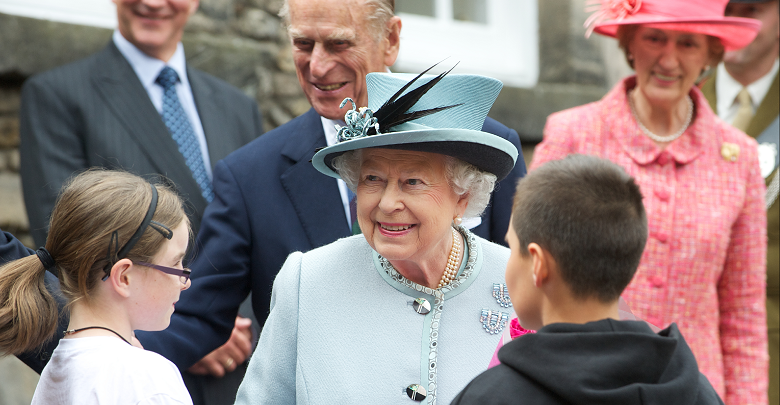 As the Colonel in Chief of the Argyll and Sutherland Highlanders, the Queen had a special connection with the castle. We welcomed her both in her role relating to the regiment, as well as on other momentous occasions in the castle’s history.

Receiving the keys to the castle 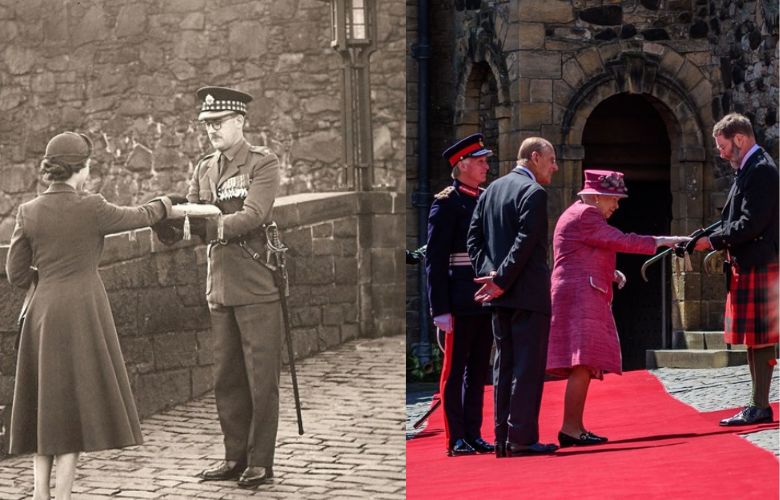 The Queen receiving the keys to the castle from the Earl of Mar in and 1954 and 2017. © The Argylls and Sutherland Highlanders Museum.

A special ceremony accompanied each visit of The Queen to Stirling Castle. As soon as her car reaches the drawbridge, the main flagpole above the James IV gate will  hoist the Royal Standard. This flag is flown at all Royal residences in the country only when the sovereign is present. At all other times, the Union Flag will be raised in its place at Stirling Castle.

Since then, the Mars have continued as Keepers of the Castle, with a few hundred years of interruption in between. During the Queen’s visits, the present Earl of Mar, James Erskine, officially presented the monarch with the keys to the castle on a cushion. The Queen would then place her hand on them for a few seconds to show her receipt of the keys.

A Princess and Colonel in Chief 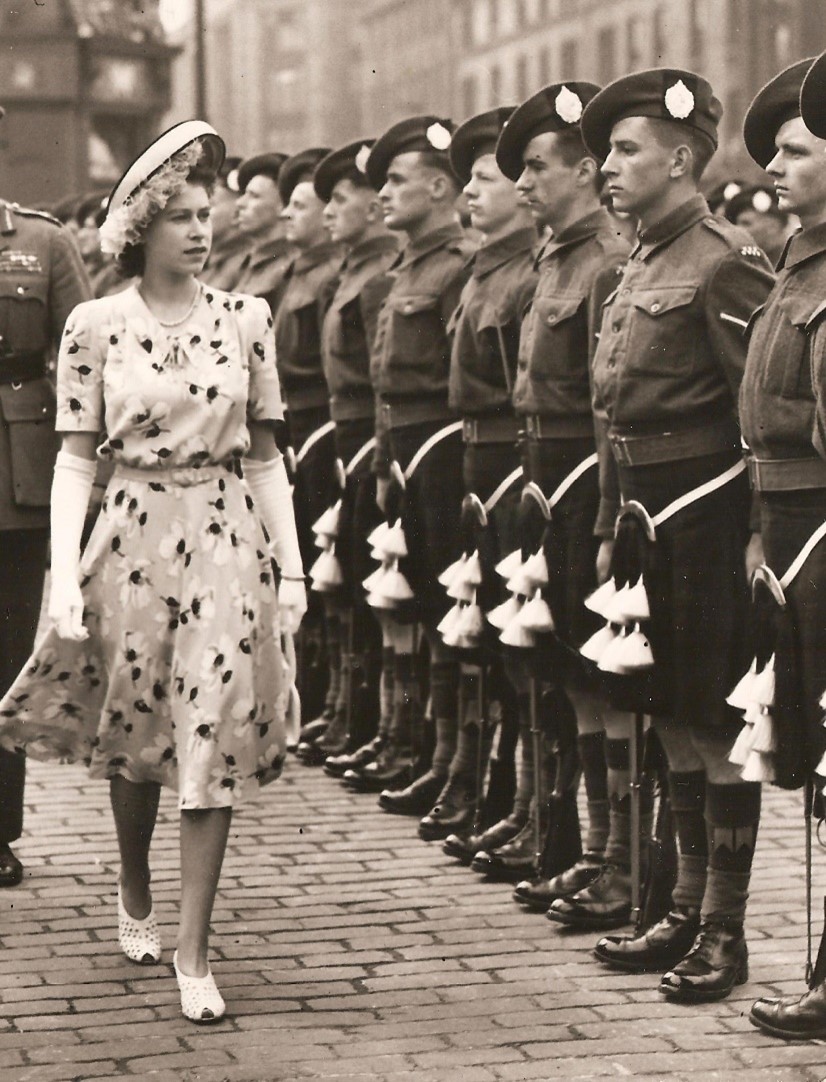 HRH Princess Elizabeth meeting the Argylls regiment for the first time at the castle in 1947. © The Argylls and Sutherland Highlanders Museum.

The Queen has long-standing ties with the Argyll and Sutherland Highlanders, who call the castle their home to this day. She was appointed their Colonel in Chief on 21 April 1947 and visited the castle for various anniversaries as such.

The appointment was a gift for her 21st birthday from her father King George VI. She visited Stirling Castle for the first time in 1947 to inspect the troops. 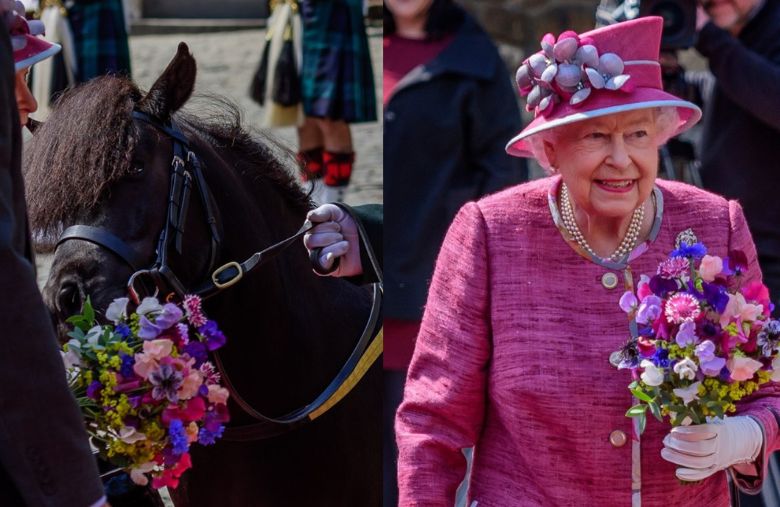 The Queen and Cruachan The Regimental Pony mascot during her visit in 2017. © The Argylls and Sutherland Highlanders Museum.

In 2007, she celebrated her 60th anniversary at the castle with a grand banquet in our Great Hall. We welcomed her again in 2017 for the 70th anniversary in this role. Friend of the castle Cruachan, the Regimental Pony mascot, was present for this visit.

Displaying his usual charm, he couldn’t quite resist to try and take a bite out of the Queen’s colourful bouquet. In response, he received a tap on the nose from Her Majesty and instructions to ‘get away’ from her precious flowers. 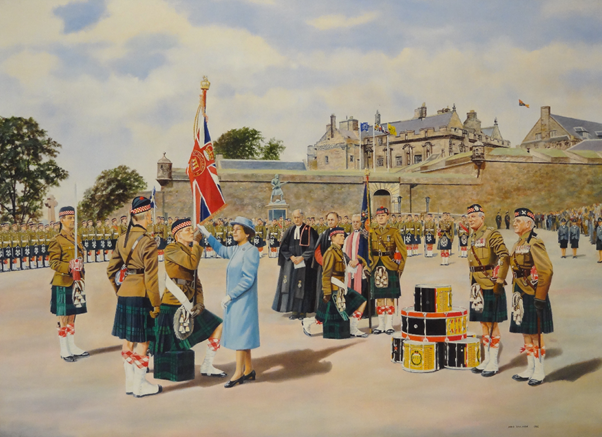 A Hall of Fame

Over the past 30 years, The Queen visited the castle several times to mark a milestone in the castle’s history as a visitor attraction. 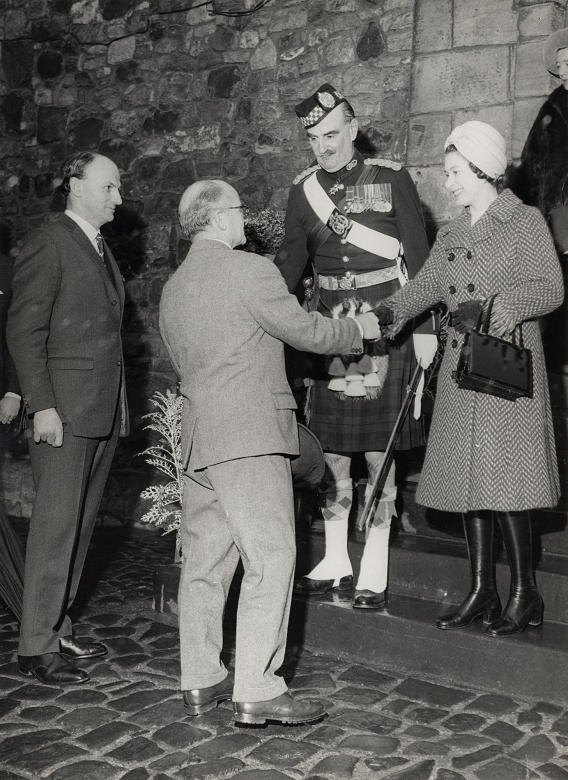 Originally created for James IV, the Great Hall has been standing on top of Stirling for more than 500 years. Once a glorious medieval banquet hall, it was later used as barracks until the regiment of the Argyll and Sutherland Highlanders left the castle in 1964. Since then, it was slowly restored. This included rebuilding its impressive hammerbeam roof made from Strathyre oak trees.

It also meant painting the hall in its original King’s Gold colour. Such a truly majestic building called for a grand re-opening to the public. The Queen visited the Stirling a few years into the works in January 1971. She observed the progress that had been made on both the Great Hall and Palace restoration works. 18 years later, she opened the Great Hall to visitors and was the first to lay eyes on its restored former glory.

A Palace Built for a Queen 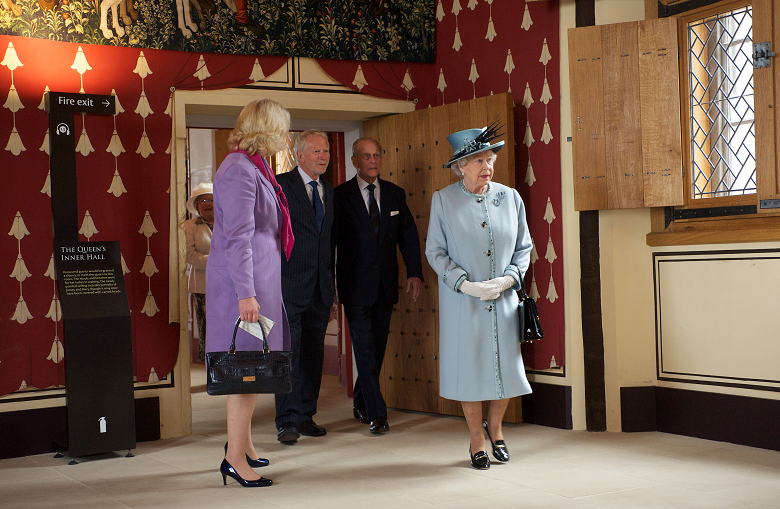 The Royal Palace at the castle was originally built in the 1540s and commissioned by James V. It was built as the home for his French bride Mary de Guise and his infant daughter Mary Queen of Scots. The king sadly died around the same time, most likely before the palace was completed.

It was therefore the two Marys who first made the palace their home and saw it in its full Renaissance splendour. In 2011, Queen Elizabeth unveiled the plaque and re-opened this glorious Renaissance building. 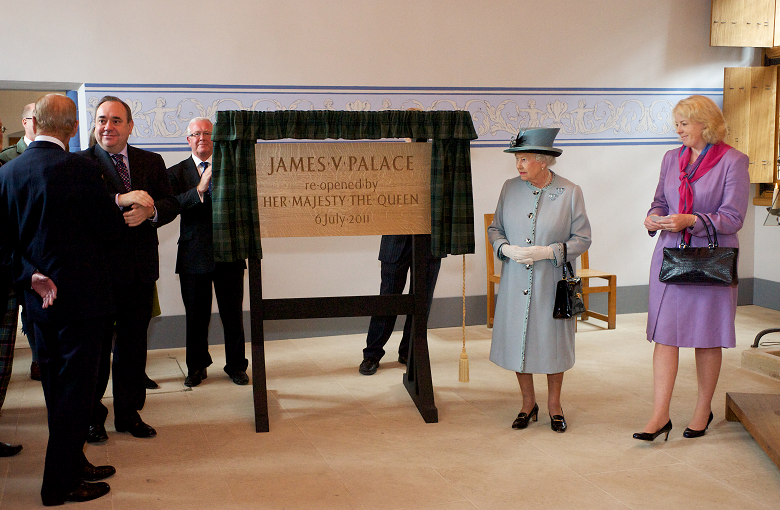 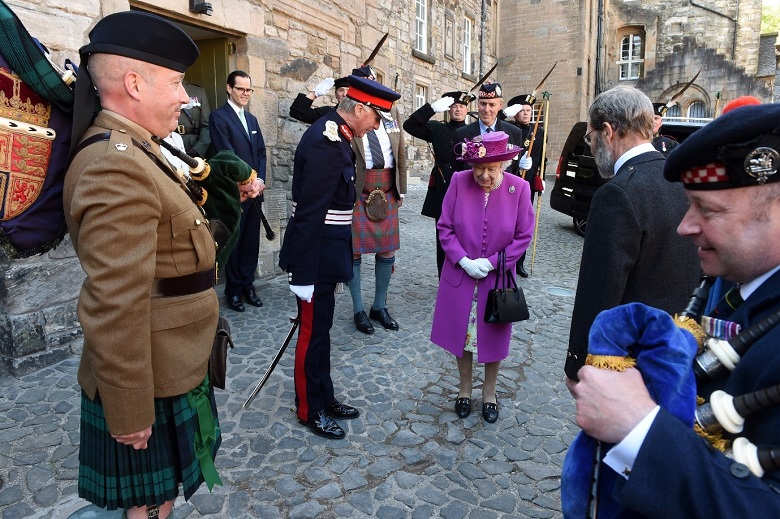 Her Majesty the Queen’s last visit to Stirling Castle in June 2021. © Mark Owens.

As we remember the life of Her Majesty, we remember her last visit to the castle in June 2021. After a three-year refurbishment, The Queen arrived to re-open the brand new Argyll and Sutherland Highlanders Museum at Stirling Castle.

Her Majesty’s visits in pictures

As we remember the life and legacy of the late Queen, we look back on some of our favourite images of her visits to Stirling Castle. 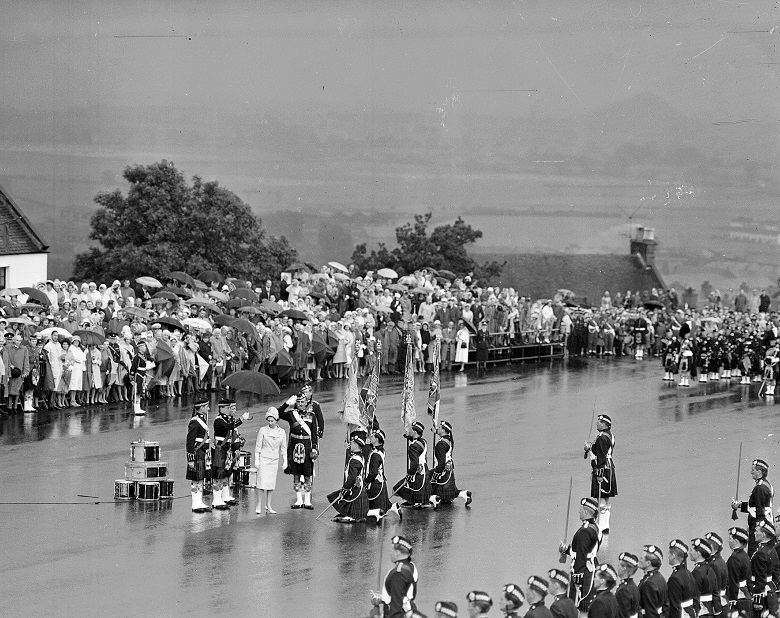 Queen Elizabeth is welcomed to the castle on the drawbridge leading into the castle in 1957. © The Scotsman Publications Ltd. Licensor www.scran.ac.uk 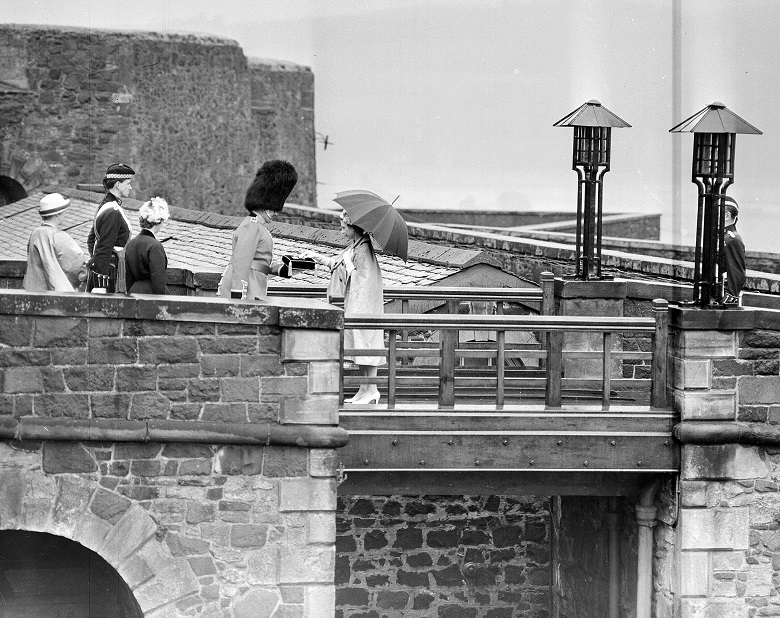 A procession on the castle esplanade for the Queen’s 10th anniversary as Colonel in Chief of the Argyll and Sutherland Highlanders in 1957. © The Scotsman Publications Ltd. Licensor www.scran.ac.uk 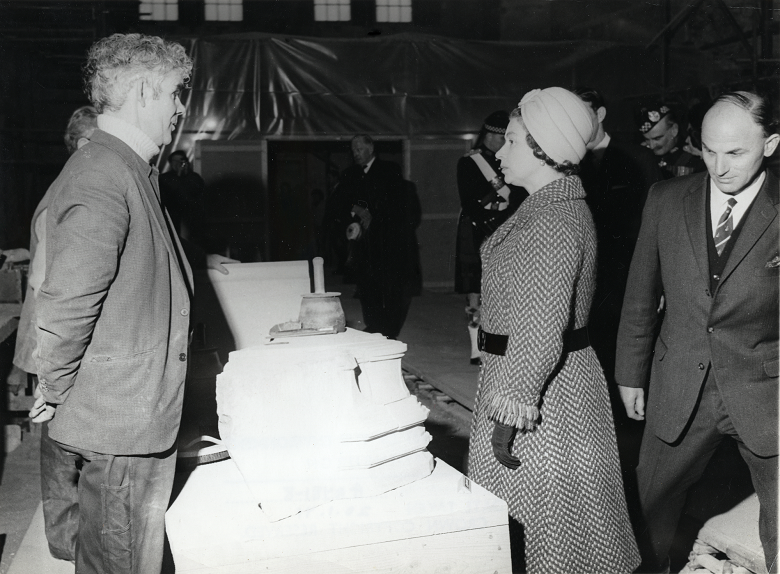 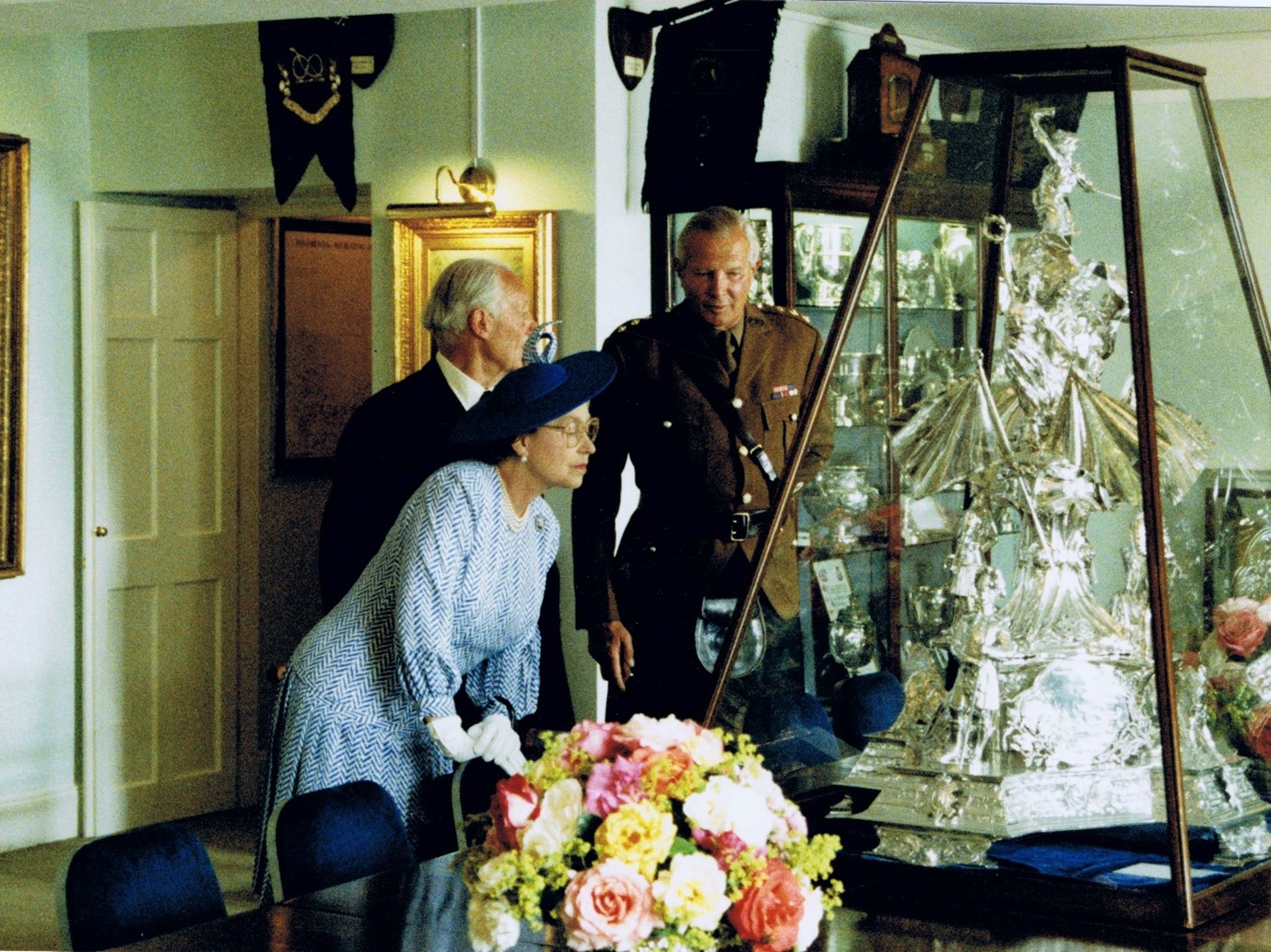 Visit to Regimental Museum and reception at the Chapel Royal in July 1989. The dress she is wearing on this visit can still be seen in the museum today. © The Argyll and Sutherland Highlanders Museum. 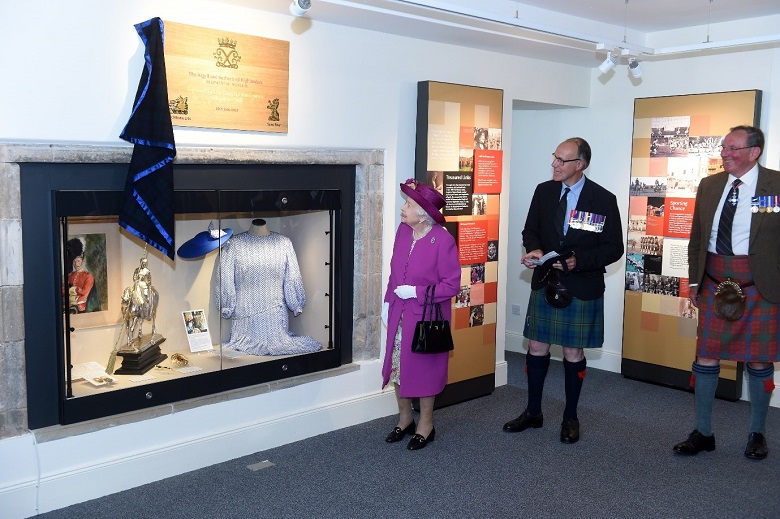 Opening of the Argyll and Sutherland Highlanders Museum at Stirling Castle in June 2021. ©Mark Owens.

Special thanks for putting this blog together to Liz Grant, Ross Blevins, Gillian MacDonald, Peter Buchanan at Historic Environment Scotland. Thank you to the team at the Argyll and Sutherlands Highlander Museum for sharing their memories of the Queen’s visits to the castle.

Bio: Julia Haase is one of our Marketing Executives at Historic Environment Scotland, working mainly with Stirling and Edinburgh Castle and other historical sites in central Scotland. She also runs various marketing campaigns throughout the year.