Gunner Haimes: The Hero during the Stirling Castle Fire

As part of Scotland’s Year of Stories, we are looking at one of Stirling Castle’s most told tales. It is about a soldier who lost his life saving the King’s Old Building from a fire in 1855. Joni and Paul, our Stirling Castle guides have researched the archives. They discovered, as is often the case, that the truth is much more dramatic than fiction.

How did the fire start and cause so much damage? Why were the townspeople of Stirling so concerned? Who was Gunner Haimes and how did he become the ‘hero’ of Stirling Castle?

In this blog, castle guides Joni and Tricia uncover the truth behind the fatal fire at the castle.

How the Fire started

It was a quiet Sunday, 18 November 1855. A small fire was lit in the room of Ensign Fawkes of the 90th Stirling Militia, in the barracks of the castle, even though he was elsewhere at the time. Suddenly, a lump of coal fell out onto the floor and quickly took hold.

The alarm was raised at 11.15pm and soon, the Inner Close filled with soldiers, along with the castle fire engine. However, it was a miserable night and the drizzle, along with low, thick mist was hampering their efforts. The town fire engine was called to assist, but it did not arrive until midnight and was of little use.

The fire continued to blaze. Although there were many soldiers with buckets desperate to help, it soon became clear there was not enough water in the castle wells. The Stirling Observer at the time noted that,

‘The Town of Stirling had offered to have the Castle connected to the water supply at a cost of £45 – an offer which was declined.’

Percussion caps and cartridges that some soldiers had left in their rooms were now exploding, which made the situation worse.

The danger was growing rapidly as only eight yards or so from the King’s Old Building was a powder magazine holding five or six barrels of gunpowder. 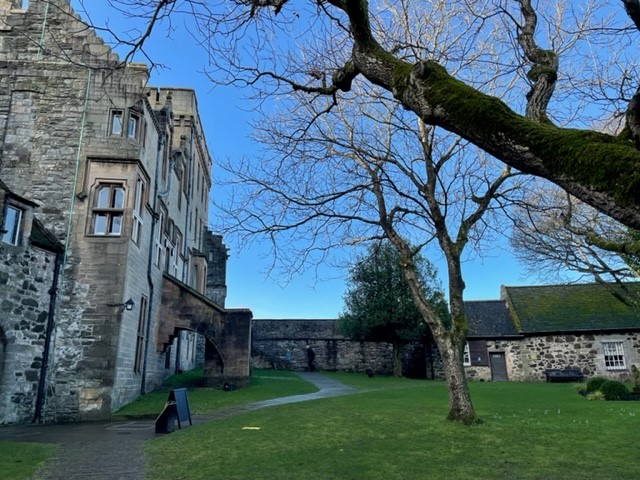 The powder magazine in Douglas Garden at Stirling Castle

This concerned the townsfolk of Stirling. The regimental powder magazine in the Douglas Gardens was only a fraction of the castle’s stores. 50 or 60 yards below was the main powder magazine which held 800 barrels of gunpowder.

It is understandable that the town had offered to pay to improve the water supply to the castle. If a fire got to this magazine, the resulting explosion would not only destroy the castle, but the town would be, as the Stirling Observer put it, ‘shook to its very core’. 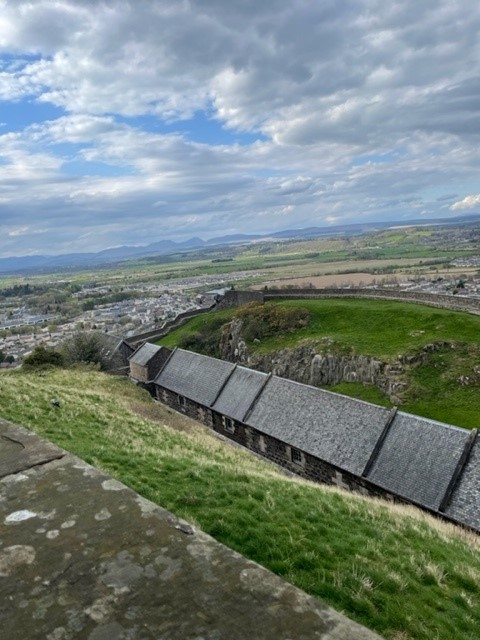 The Men of the Hour

Amongst the darkness and the flames that night, one man worked tirelessly. Gunner Charles Haimes, Royal Artillery, Master of the Armoury, was in charge of the guns and the ammunition. More than anyone that night, he knew what damage the fire could do if it got to the gunpowder storage.

Along with Major Peddie, he tried to keep the fire under control and away from the magazines. They wanted to protect the famous Douglas Room.

At the time, people believed that the Douglas Room was the most ancient part of the building. It became part of James IV Kings Hoose when it was built in 1496. This likely was the site of the infamous murder of William, 8th Earl of Douglas – The Black Douglas by James II. 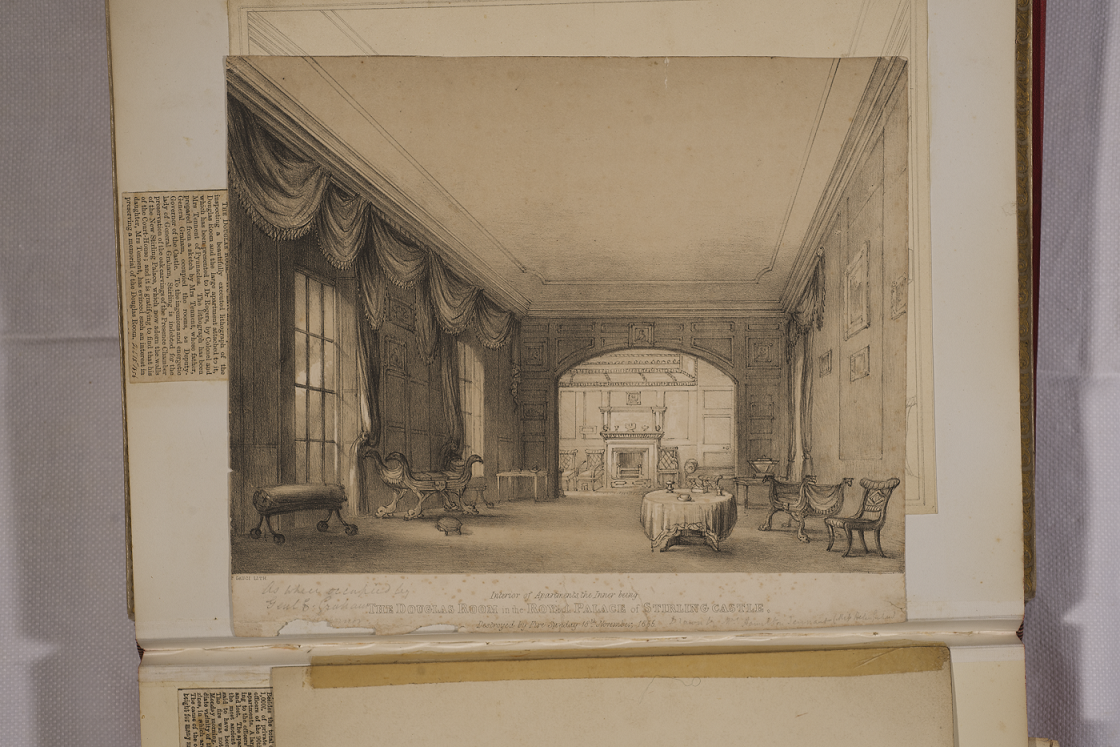 As the night wore on, Lt Dawson climbed on to the roof and began to remove the timbers to attempt to stop the fire from spreading.

A relay of men was organised. They made holes into the roof and poured water on the walls to cool them. By three o’clock, the roof fell in, and the fire could be seen for miles. Gunner Haimes was repeatedly told to stand down, but he refused, fighting all that long night to keep control of the flames.

The fires were subdued around 8am, but the losses were devastating. Over a thousand pounds worth of private property and money was lost. The heat fused some of the regimental silver plate together. In the Douglas Room, the central star was partially damaged, and the carved borders were lost to the flames.

At the time of the fire in 1855, 18 apartments were in the far corner of the King’s Old Building which the junior officers used. These rooms had once formed the accommodations for the Governors of the Castle.

The famous couple General Graham and his artist wife, Jane Ferrier had raised their family in these rooms in the early 1800s. The Grahams would have once used the Douglas Room as their drawing room.

Below is a sketch by Jane Ferrier. We believe it shows how the star and the cornice in the Douglas room looked when she was in residence in the 1830s, perhaps the original. It is these carvings that Gunner Haimes and Lieutenant Dawson were working so hard to save. 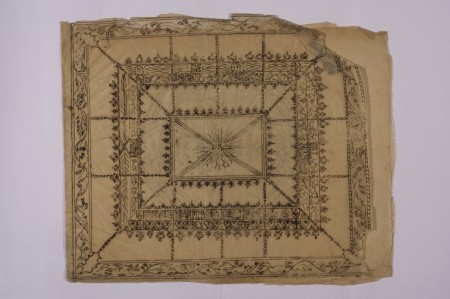 A sketch by Jane Ferrier of what likely is the star and the cornice in the Douglas Room, 1830.

Unfortunately, Gunner Haimes succumbed to the smoke and the effects of ‘over-exerting himself.‘ He battled on for a further 13 days but died on 1 December 1855, the first birthday of his youngest son.

There is no doubt that if it had not been for the efforts of Gunner Haimes, Major Peddie and their comrades, the fire would have destroyed the King’s Old Building and most of the town.

Gunner Haimes was 47 when he died, and he left behind a wife and eight children. He was buried next to the castle in the Old Military Burial Ground in Pithy Mary and immortalised in a poem:

‘What shrine most meet for solemn thanks today…

The Heavenly guardian of our earthly towers’

Although the townspeople of Stirling had a collection to raise money, it was not enough for a headstone.

The Stirling Observer noted on his funeral:

‘We have seldom seen a more respectful attendance or our townsfolk at a military funeral, evincing the general respect in which the deceased was held in Stirling.’

Today, the effects of that evening in November 1855 are still visible at the castle. The north corner of the King’s Old Building that was destroyed in the fires was rebuilt in 1857 by Robert Billings. 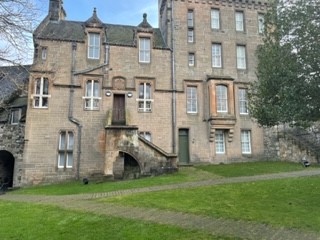 View of the back of the King’s Old Building 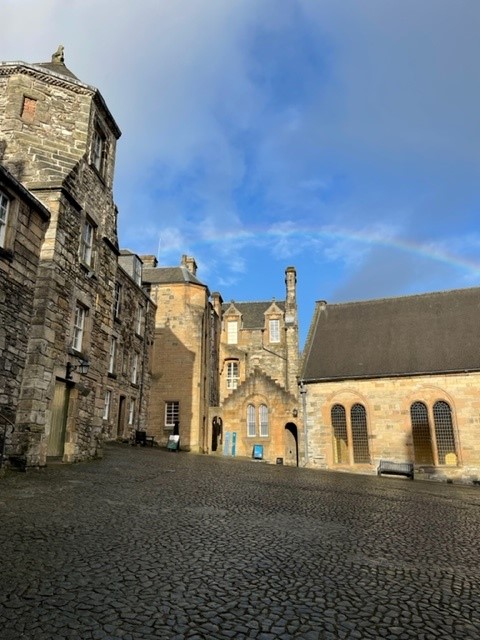 View of the King’s Old Building at Stirling Castle

However, the Victorian style stands in obvious contrast to the rest of the Kings Old Building. A newly refurbished cornice and star were installed above the fireplace in The Douglas Room in the Argyll and Sutherland Highlander’s Regimental Museum. 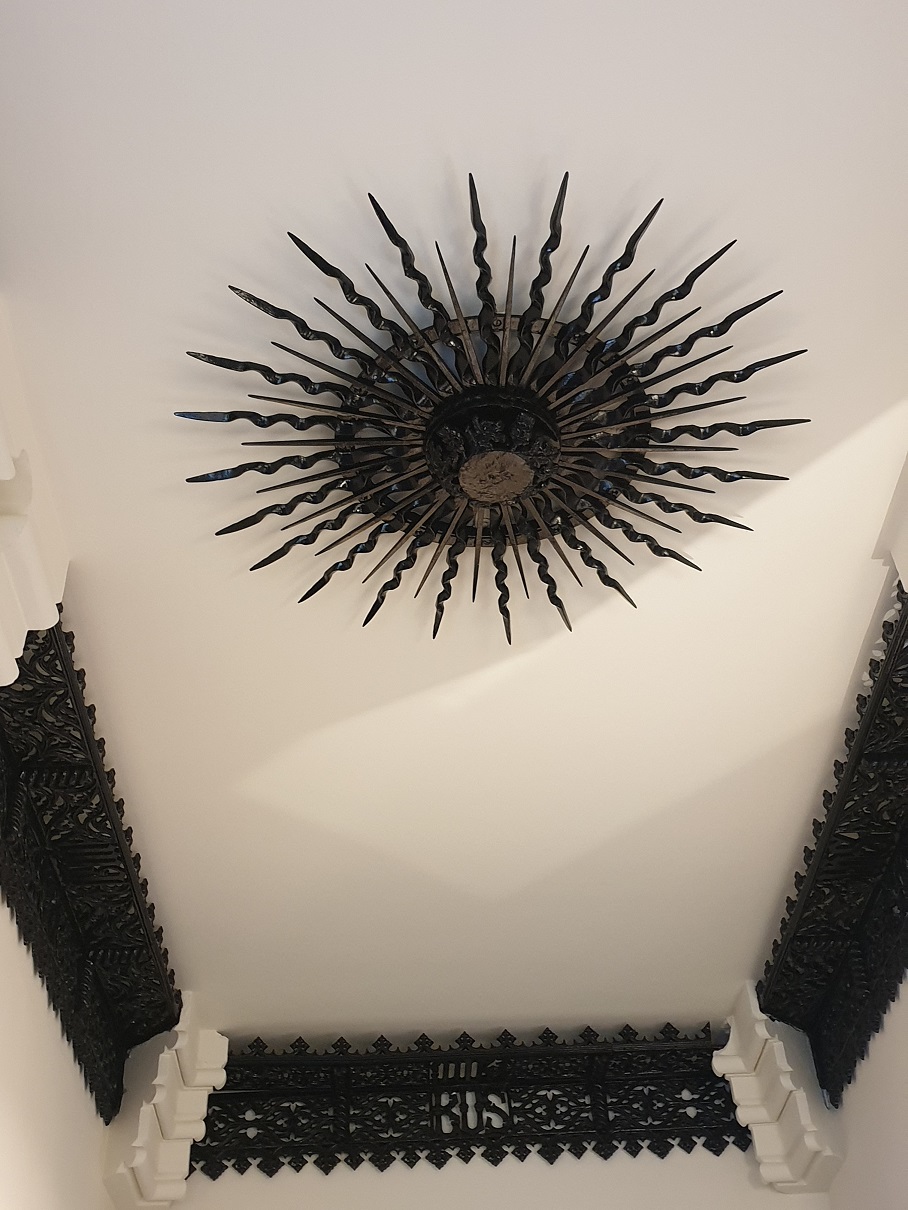 Central star in the Douglas Room

Explore the castle like you’ve never seen it before

Castle guides Joni and Paul did extensive research in archives, newspapers, along with records held in the Argyll and Sutherland Highlander Museum, with the assistance of museum curator Rod Mackenzie.

Join our upcoming Conquering the Castle event on Saturday, 18 June for a day of summer family fun and see Stirling Castle as it’s never been seen before.