Restoring Magnificence: The restoration of the palace at Stirling Castle

Lots of research, meticulous attention to detail and a lot of love! Castle guide, Russell looks back on the wonderful restoration of James V’s Palace at Stirling Castle.

2021 marks the ten-year anniversary of the unveiling of the refurbished palace at Stirling Castle. The work on this decade long project began in 2001. It was a labour of love that involved ground-breaking research and a detailed restoration of the palace to how it may have looked when it was new in the mid-1540s. Her Majesty Queen Elizabeth officially opened it on 6 July 2011. Historic Scotland could finally show off its centre-piece project to the public!

A Royal History of the Palace

The palace is one of the greatest remaining Renaissance buildings in Scotland, if not the UK. Artistic and architectural styles from across Europe, including Italy, France and Germany influenced its design. It is a marvellous and fitting recreation of the wedding gift James V gave his French bride Marie de Guise. 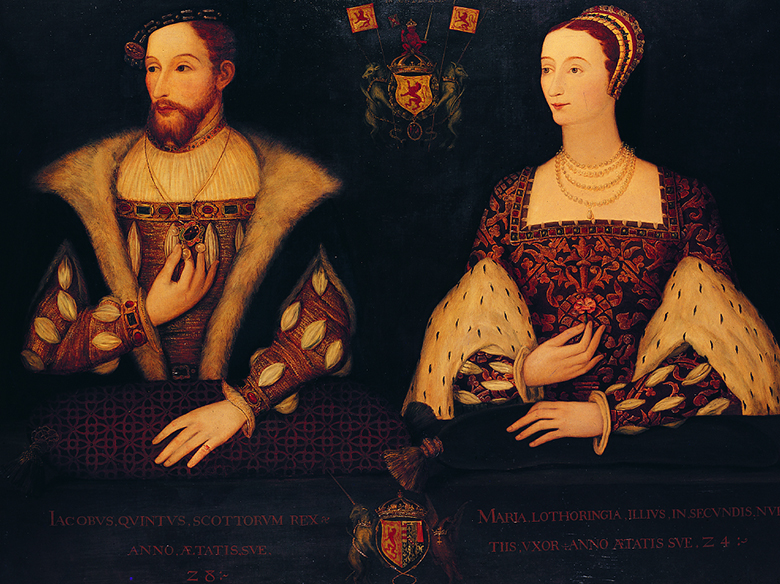 James and Marie were married in 1538 so work started on the palace around then. The palace was completed sometime in the summer of 1543. Records show that this is when Marie de Guise and her daughter Mary, Queen of Scots, moved there from Linlithgow Palace.

Unfortunately, James V died in December 1542 and never saw the completed palace. For most of Mary’s first six years she lived with her mother in the palace, secure behind the walls of the castle. In 1548, she was sent to France for her safety.

Mary Queen of Scots’ son James VI would also spend most of his early years at the castle living in the palace. The palace’s fortunes changed when he left Scotland in 1603 to take the English throne and unify the kingdoms of Scotland and England.

A Military History of the Palace 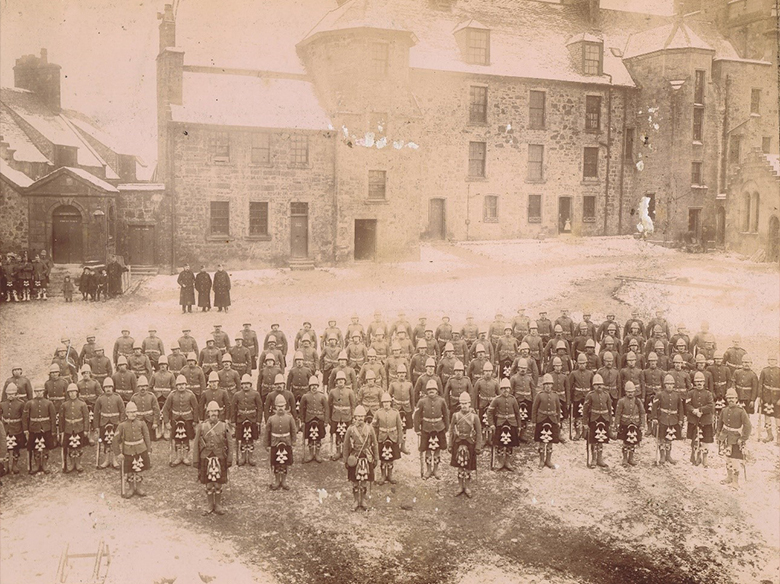 Image kindly provided by the Argyll and Sutherland Highlanders Museum

After James VI’s departure, the military only used the castle and palace sporadically. At times of emergency, local militias would use the castle as a mustering point. Usually there was only a small military presence at the castle. This limited use was not enough to warrant careful maintenance. In August 1787 when the poet Robert Burns visited the castle he lamented in his poem Stirling Lines:

“Here Stewarts once in triumph reigned,
And laws for Scotland’s weal ordained;
But now unroofed their palace stands,
Their sceptre’s swayed by other hands;”

From the 1790s, the army increasingly used the castle. It became associated in particular with the Argyll and Sutherland Highlanders regiment. They used the castle as their main base until 1964 and as their HQ until 2007.

During this military phase, the palace was significantly modified, particularly internally. Initially, the upper levels of the palace were adapted to become the governor’s residency. The larger state rooms on the principle level were used for storing oatmeal. These were later adapted to provide barracks. Later still, it was divided into offices and officers messing facilities, complete with bars. Such military alterations occurred throughout all the royal buildings at the castle.

It wasn’t until after 1964 that Historic Scotland could begin the slow, painstaking process of researching and restoring all the main buildings. The palace project was the last of the major restoration projects at the castle. Prior projects included the restorations of the Chapel Royal (completed 1996) and the Great Hall (completed 1999). 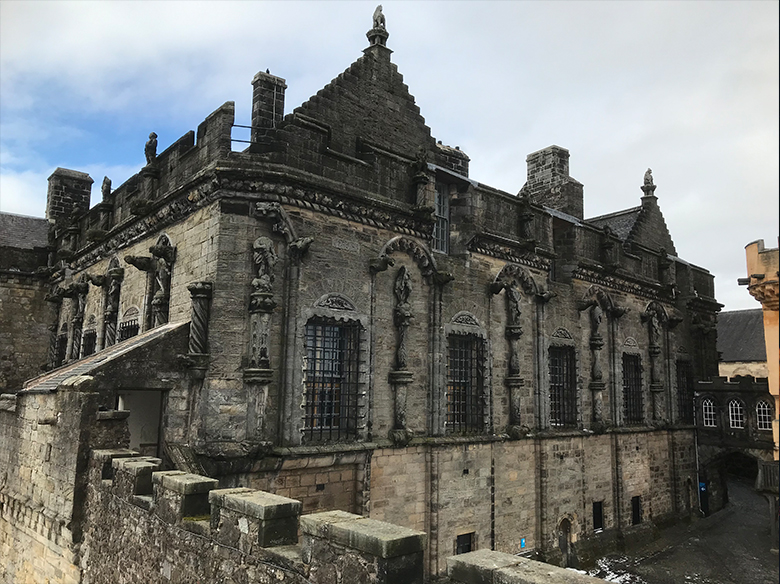 While the palace’s external façades received little work physically, much research was undertaken. Of particular note were over 250 carvings and statues that adorn the outside of the palace. The main line of almost full-size statues were of great interest. These include an image of James V, on the north façade. Sharp-eyed visitors can also spot an image of the Devil on the south façade. It faces the most likely point of attack on the castle. Various classical gods and goddesses were also identified.

The research highlighted that these statues would have all been coloured when the palace was first built and occupied. It also identified a number of original classical sculptures and 16th-century engravings. These likely provided inspiration for the classical figures on the palace walls.

The focus of the research and restoration work was the interior of the palace. Interior partition walls built by the army were removed. The original round arrangement of the rooms was restored. The main rooms included a set of three rooms for the King and the Queen each. A large Outer Hall, a smaller Inner Hall (sometimes called a Presence Chamber) and an even smaller Bedchamber. There was also an entrance corridor or gallery to the west. This linked the King’s and Queen’s apartments. 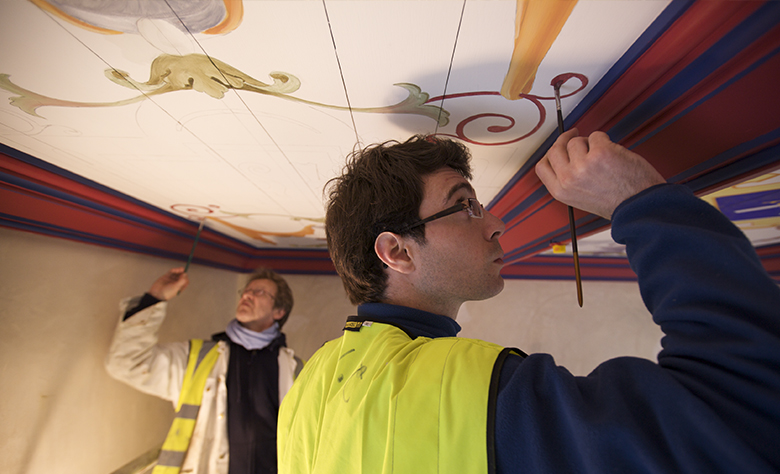 Researchers looked at a number of sources to help with the decorative design of the rooms. These included contemporary manuscripts and engraving sets from the the 16-century that influenced design fashions (such as Hans Burgkmairs). They also scoured the archives for contemporary accounts of visits to the palace. Another good source of information was surviving buildings of the same age. These were in Scotland and France in particular.

The researchers looked at detailed descriptions of furniture in royal inventory lists from this period. They also based them on existing pieces of 16th-century furniture. These can be found in museum collections across Scotland.

To reflect how the palace may have looked like, the King’s apartments were not furnished. This is because James V died before the palace was completed. The restoration work was carried out as near as possible as it would have been in the 16th-century. Two particular parts of the project reflect this well: the Unicorn Tapestry Project and the Stirling Heads Project. 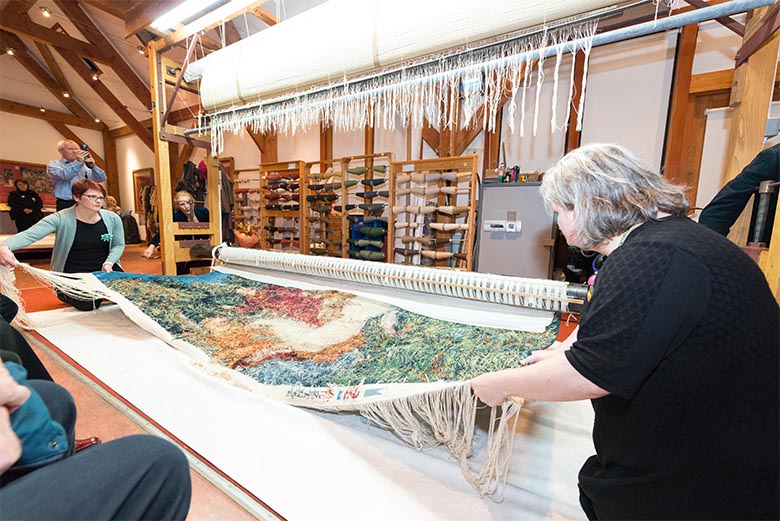 The palace needed a set of tapestries. This was common for a Renaissance palace. Sadly, no Scottish tapestries from this period survived. Researchers looked to inventory lists and saw that James and Marie had over a hundred tapestries!

They also found that the royal couple owned two sets based on the theme of the unicorn. We decided to copy a unicorn set and chose The Hunt for the Unicorn. The original now hangs in Cloisters Museum, the medieval section of the Metropolitan Museum of Art in New York. 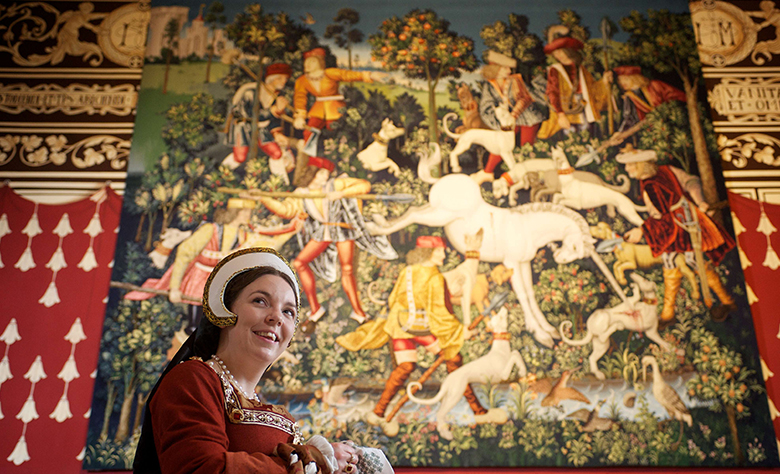 The international team of weavers working on the tapestries got great access to the original tapestries. They were able to examine the work and even got to turn over the originals. This helped them look at the less faded threads to the rear to match the colours. The seven tapestries took 13 years to weave. They now hang in the Queen’s Inner Hall.

The restoration of the Stirling Heads 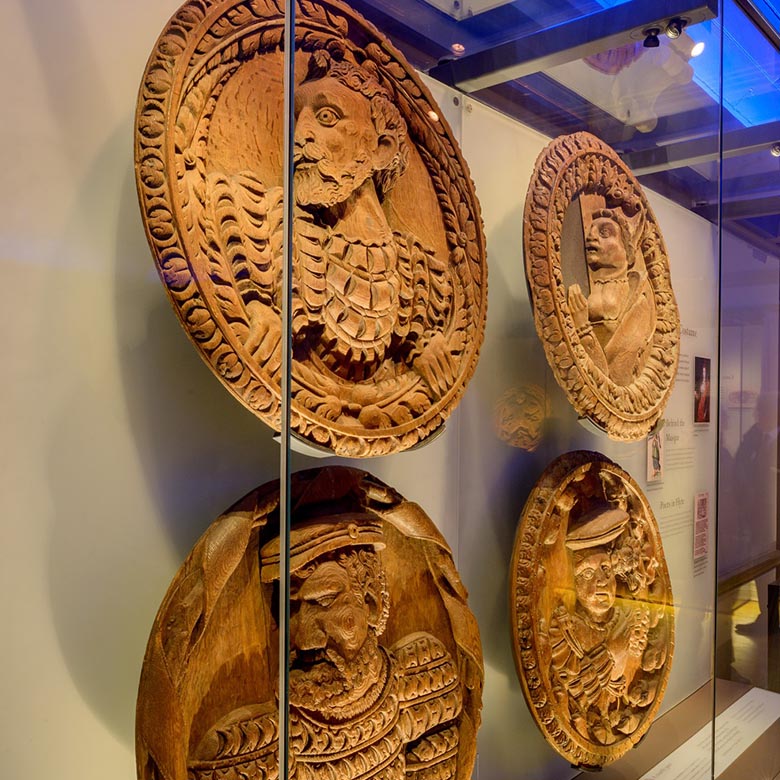 In the King’s Inner Hall is another amazing set of replicas made for the palace restoration: the Stirling Heads. The carved oak roundels with portraits on them have often been referred to as Scotland’s other crown jewels.

These decorated the ceilings in the palace until 1777. Allegedly, they were then removed after a soldier marching through the palace was nearly killed by one falling off the ceiling! Apparently the army were breaking them up to use as firewood until a local dignitary put a stop to this and saved them. The remaining Heads were dispersed around individual homes around Scotland. It was not until the late 1800s that the local Smiths Art Gallery and Museum started to collect them again.

Head over heels for detail

As part of the restoration, this rare collection was researched, reproduced and displayed once again in the palace. The originals are on display in a new gallery space in the upper floor of the palace. They were too precious to be hung on the ceiling. But Historic Scotland wanted to show visitors how the Heads may have looked in situ and commissioned local wood carver John Donaldson to hand carve 36 replicas. He carved one additional one to fill the ceiling space. This one was modelled on his daughter. The replicas now hang on the ceiling of the reconstructed King’s Inner Hall. It took John five years to craft these decorative panels. Donaldson learnt much about the carving process and the Heads. He even found a possible piece of harp music carved around one of the Heads. 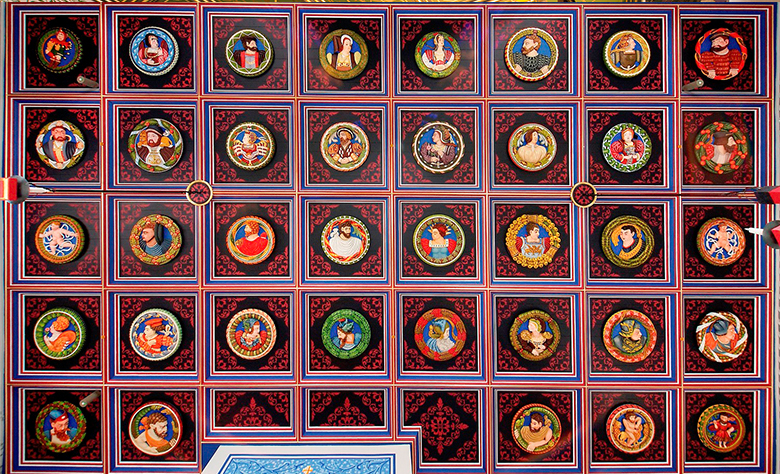 The original Heads are now just plain polished wood. However, research found small traces of paint dating to the 16th-century. After they were installed, the replicas were painted to reflect this. A specialist art conservation and restoration team led by Graciela Ainsworth carried out the work.

Historic Scotland also asked Dr Sally Rush, Art History lecturer at Glasgow University, to research who these Heads may be. Rush has called the Stirling Heads ceiling ‘a hall of fame’. She found that the figures range from contemporary, such as James and Marie themselves, to historical and mythological figures, such as Roman Emperors and Hercules. At least one, the Julius Caesar one, again links to engravings by Hans Burgkmair. 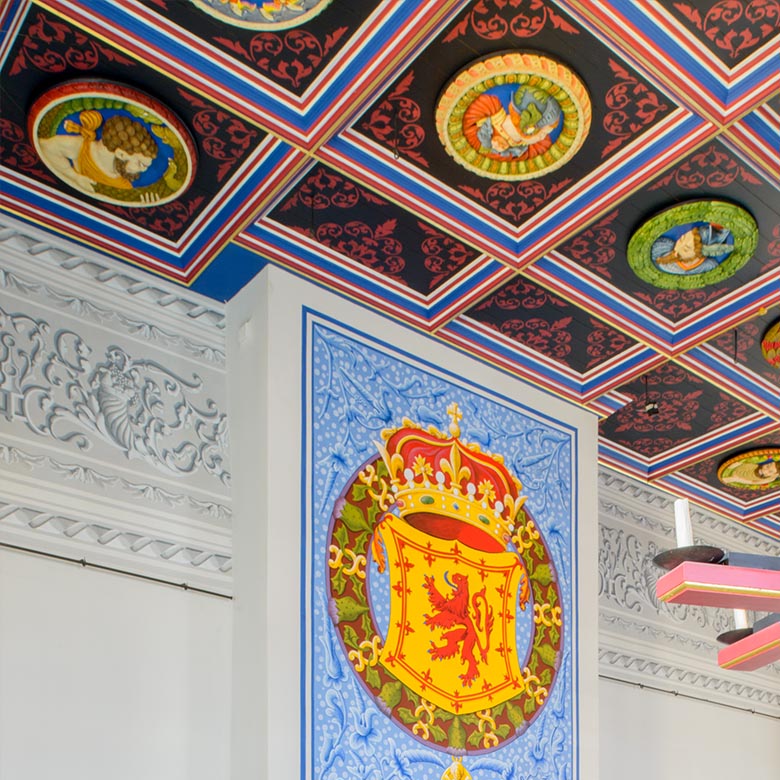 Daniel Defoe, English spy and writer of Robinson Crusoe, in 1726 referred to the ‘Palace and Royal apartments’ at Stirling Castle as ‘very magnificent, but all in Decay’.

The painstaking restoration, such as the work on the Heads, the Unicorn Tapestries and all the restoration work at the palace, have restored their magnificence. The restored palace has ‘wowed’ visitors for the last ten years. It remains a ‘must see’ feature of a ‘must see’ castle.

Russell has been with the guides at Stirling Castle since 2017. Before that he worked at a number
of other HES sites including Aberdour Castle, Castle Campbell, Dunfermline Abbey and Palace and
Inchcolm Abbey.