Below Stirling Castle, you’ll find some intriguing grass-covered mounds called the King’s and Queen’s Knots. But what’s in a Knot? Join our expert guides to find out more. 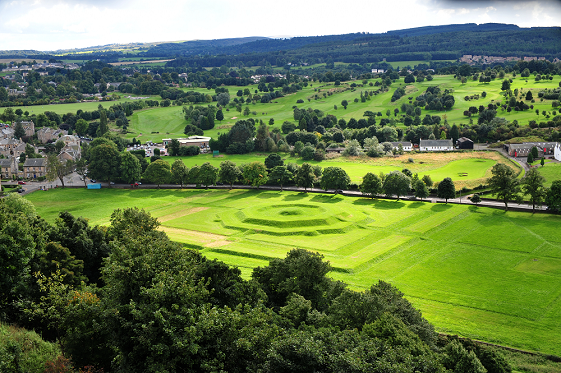 While they can’t welcome you to the castle in person, our guides are sharing their favourite stories from the castle’s history on our blog. In this first feature, Russell shines a light on the King’s Knot, the earthworks just outside Stirling Castle.

Below Stirling Castle to the south-west are a number of intriguing grass-covered stepped mounds making geometric landscape features called the King’s and Queen’s Knots. These features are generally considered to be the remains of royal gardens. Gardens may have existed here since, at least, the late-15th century. However, what we see today is generally thought to be the remains of 17th century gardens constructed for Charles I’s visit in 1633, with some 19th century reconstruction.

Today they are, for the people of Stirling, a much-loved and well used public space, affectionately called the Cup and Saucer. They are used for rolling Easter eggs, summer picnics, winter sledging and walking, all year around with or without dogs. 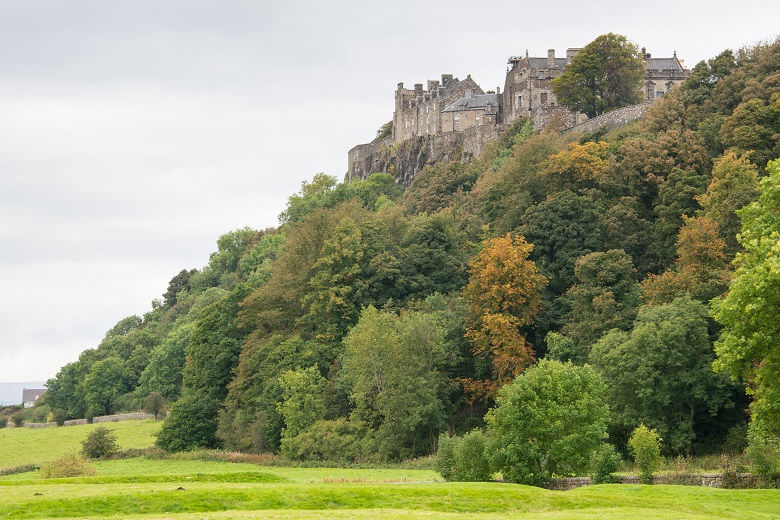 The King’s Knot and the Round Table

The Knot name is generally seen as applying to ornamental gardens; however it is a relatively recent name, only appearing in the 1740s. An apparently older, more intriguing name is the Round Table, linking Stirling with the legendary King Arthur.

As early as 1375 Barbour, in his epic poem The Brus, describes how Edward II escaping from Stirling Castle after Bannockburn ‘went…right by the Round table away’. William of Worcester in his Itinerarium, 1478, said that ‘King Arthur kept the Round Table at Stirling Castle’. And David Lindsay wrote in his poem The Testament and Complaynt of our Soverane Lordis Papyngo, c1530, of:

… fair Snawdoun! With thy touris hie,

It is possible that the kings of Scotland, many of whom were fascinated by the Arthurian legends, may have constructed gardens here with some reference to the Round Table. Likewise, this area has also been associated with royal jousting events and such areas were often referred to as round tables, as was Edward III’s erected at Windsor. Presumably this was based on the idea that, in such combat events, in theory, all knights were equal regardless of rank.

Perhaps the most persistent explanation is that this area was the site of some pre-historic, Roman or sub-Roman structure that has become associated with Arthur. 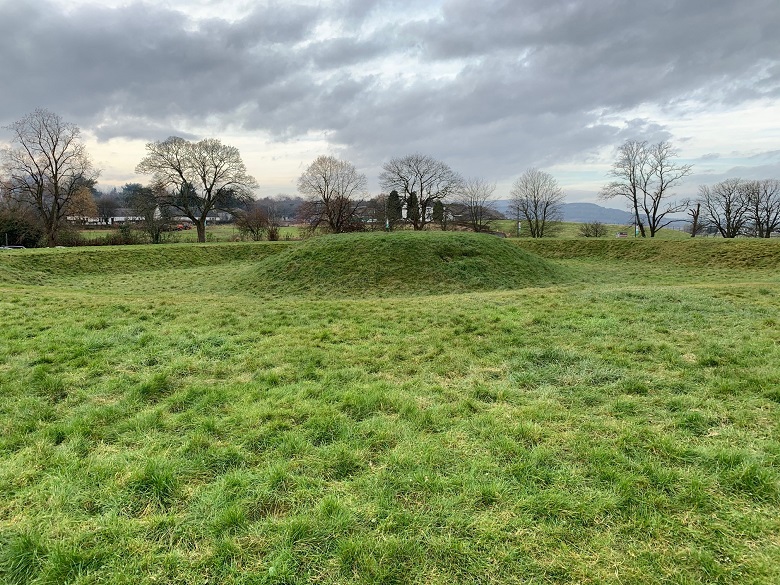 In the Roman or sub-Roman period, the territory now called Scotland was occupied by three main peoples. The Ancient Welsh-speaking Britons held the southern part largely below the Forth-Clyde frontier. Above this, the Picts occupied most of the territory with the exception of the extreme west which was increasingly being occupied by the Gaels from Ireland.

With a power-centre at Edinburgh, the British Gododdin controlled vast territories, possibly extending as far south as northern Yorkshire and into Stirlingshire and Clackmannanshire. In the period 600-655 AD the Gododdin territories came under threat from Northumbrian Angles. Stirlingshire then became, not for the last time in its history, the focus of a power struggle between the British, to the west, the Gaels, to the north-west, the Picts, to the north-east, and Angles, to the east.

The Stirling area at this period seems to have become a highly militarised zone. There is evidence of many early hillforts in this area: on the Gowan Hill, the Abbey Craig, Dumyat in the Ochils and, in all probability, one on the Castle Hill itself. 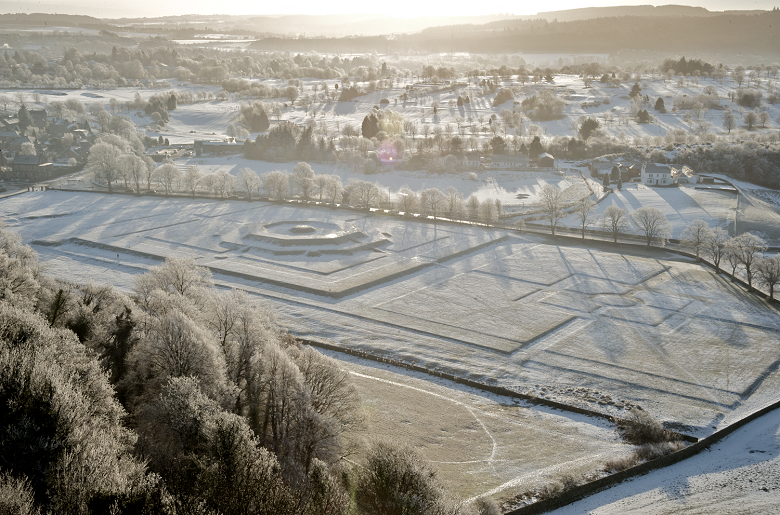 What’s in a name?

The very name Stirling, it has been suggested, may be derived from ‘the place of striving’, given all the battles around the area. Another possible derivation of the name, reflecting the early occupation of the area by the Welsh speaking British, is that Stirling is a corruption of the Ancient Welsh Yestre Felyn, signifying ‘the dwelling of Velin’, whoever ‘Velin’ may have been. So it would be little wonder that tales of a fierce and successful warrior-king such as Arthur may have originated from this area and this time.

In fact it is often pointed out that Arthur’s army is often referred to as Gwyr y Gogledd, ‘Men of the North’ and for the early British in the sub-Roman era the North would have meant southern Scotland. Even more intriguing is a reference to Arthur found in the poem Y Gododdin, about Gododdin warriors and their allies facing the Angles at the battle of Catterick. While describing a valiant, powerful Gododdin warrior one stanza in the poem claims that ‘he was not Arthur’. Despite the debatable nature of this stanza, in terms of age and origin, many have used this to connect Arthur with the Gododdin and their southern Scottish realm.

It is tempting to speculate about older associations that Stirling Castle may have had. Even modern scientific research can sometimes just add fuel to the speculative fires. There have been some non-intrusive archaeological investigations at the Knots.

Aerial photographs taken in 1980 discovered evidence of three concentric ditches of earthworks underlying the King’s Knot. Work carried out in 2011 also confirmed the existence of older structures beneath the Knots. The investigators were careful to say that their findings only ‘points to a multi-period construction’ which ‘perhaps’ includes some ‘of Iron Age date’ but that didn’t stop national newspapers proclaiming in headlines that ‘King Arthur’s round table may have been found by archaeologists in Scotland’. 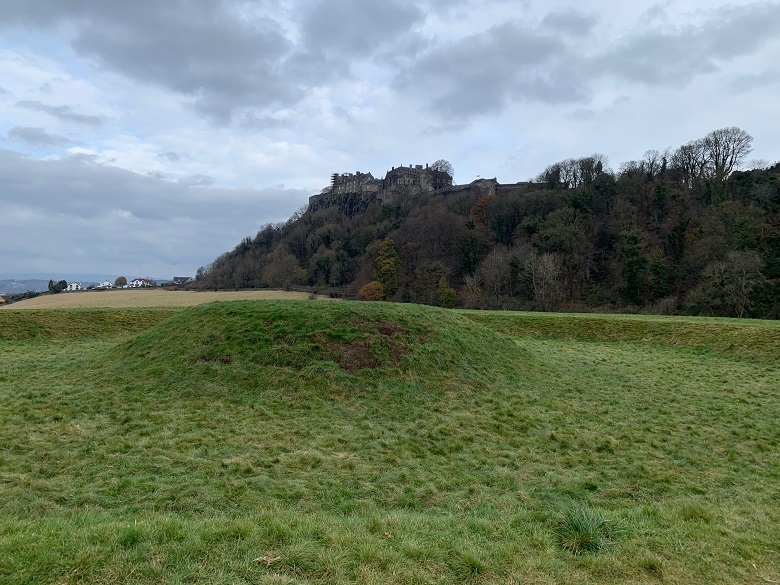 Stirling before the Castle

But, for me, such speculation about the legends and early history of the Stirling area is part of the appeal of the Knots.

When I studied Scottish History at University this early period fascinated me. Here at Stirling Castle we generally don’t go back further than Alexander I in 1110, so the Knots allow me to talk to visitors about this earlier period. They also allow me to explore a bit beyond the Castle and explain how the presence of the Royal Castle affected the landscape around it.

As a very distinct landmark they are also useful for giving directions, particularly to the very interesting Smiths Art Gallery and Museum that sits close to the Knots. So, the Knots for me are not only intriguing, but are a useful tool by which I can introduce many interesting and novel aspects of Stirling Castle into my conversations with visitors.

About the author
Russell Moran is a guide at Stirling Castle and loves to share interesting stories with visitors at the castle or the reader of the castle blog.