Traditional Music for Your Next Event

Every great event needs great music and we have caught up it The Royal Burgh of Stirling Pipe Band to hear more about the events they play.

A Scottish pipe band is a musical ensemble consisting of pipers and drummers and in Scotland it takes an essential ceremonial and celebratory role in many events.  A pipe band brings ceremony and atmosphere – you can’t miss a “Beating the Retreat” for a grand way to round off something like a gala dinner or reception. The Royal Burgh of Stirling Pipe Band plays at Stirling Castle for a whole array of corporate and private events and really wow our guests every time.  We’ve interviewed Gerard Dewar, the founding bass drum player in the band to find out more about their offering.

How long has the pipe band been playing?

The Royal Burgh of Stirling Pipe Band was founded in 1977 and we’ve been playing ever since. Since then we’ve won many awards including the World Championships, something of which we are all really proud.

What is the band’s favourite tune to play?

For corporate and private events guests love to hear us play Scotland the Brave, Amazing Grace and of course, Highland Cathedral.

What is your favourite thing about playing at Stirling Castle?

It has to be the location and its place in Scottish history, having served as the seat for Scottish Kings and Queens for so many years. We love the view from the Queen Anne Gardens as it’s the best spot to see the breath-taking views across the Stirlingshire countryside.

For guests attending events in the Great Hall, this is a unique opportunity to dine and dance where Scottish royalty and nobility have done for hundreds of years.  We like to think adding in our pipe band makes the evening even more special. 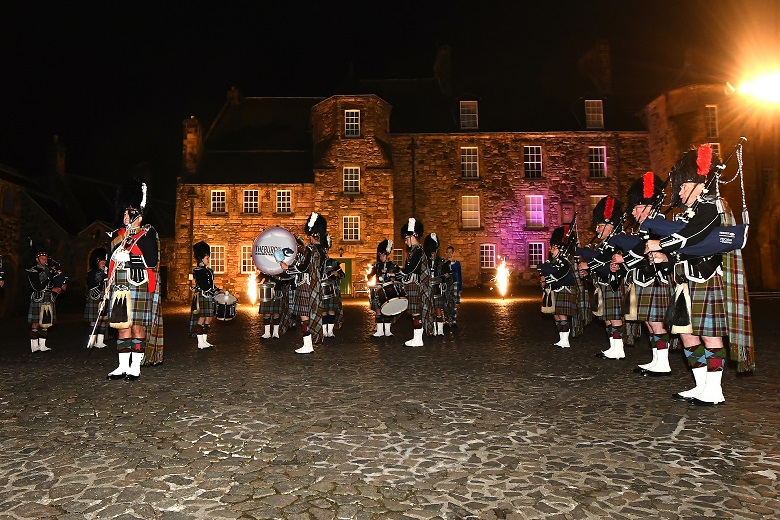 The Royal Burgh of Stirling Pipe Band Playing at an event at Stirling Castle. © John Rae.

Where is the most interesting place you have played as a pipe band?

We feel honoured to play at Stirling Castle as a band; with a 43 year history of playing, we are proud of our long and prosperous association.

However, outside Scotland, one of our most memorable locations we played was during a visit to China as part of a Scottish delegation to promote Scottish culture. During this visit the full band played along the top of the Great Wall of China which was very special, we’ll remember it forever.

What can event organisers and guests expect to see?

Our band comes with around twenty members in full ‘Number One’ Scottish Dress. We wear the Stirling Bannockburn tartan (kilts and plaids).  It’s a pretty impressive turnout!

We have our own group of Highland Dancers who dance at every event too, which come as part of an inclusive booking.

What type of events do you play at?

We play at a wide range of events, including corporate gatherings, private celebrations and we also do weddings. We also provide a solo piper for smaller social events – no job is too big or small. As well as Stirling Castle, we often play at other venues including Edinburgh Castle.

We will always strive to play the music of choice of the event organiser where possible and we like to bring variety to our range as well. 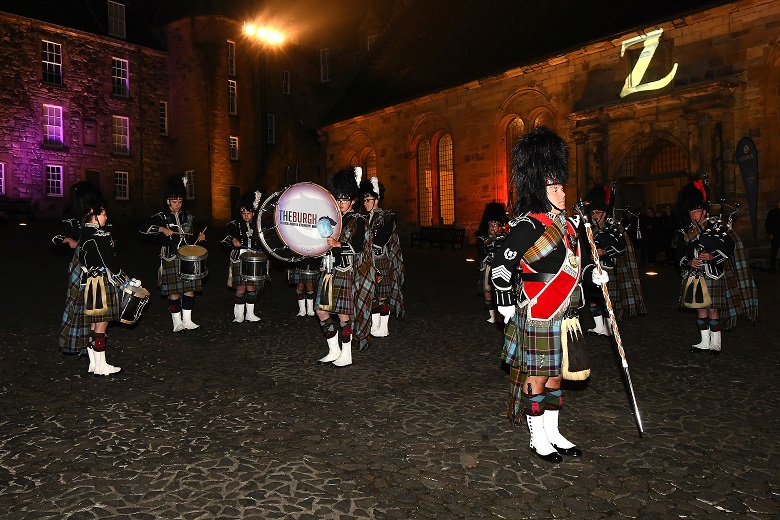 The Royal Burgh of Stirling Pipe Band Playing at an event at Stirling Castle. © John Rae.

Why should event organisers consider having the pipe band at their next event?

The pipe band presentation and sound are very impressive and of course, represents THE sound of Scotland! When playing at Stirling Castle guests are invited out into the top square where they will hear the band strike up in the lower square and then see them march up playing towards them. This is a wonderful surprise and quite an experience. The band will also play out in the top square as a grand finale to the event which rounds off the evening perfectly.

During occasional, inclement Scottish weather, the band will strike up outside and march into and play in the 16th-century Great Hall and through guests up onto the raised dais area, or in the Chapel Royal. This can be even more impressive because of the brilliant acoustics.

Weather doesn’t deter from the pipe band providing a unique, memorable experience – everyone seems to love it when we play – and we love playing for them and making their visit to the castle just that bit more special.

To make your next event at a historic site fit for kings and queens, the Royal Burgh of Stirling Pipe Band is available to play at the castle for your next venue hire. For enquiries please contact our team:  functions@hes.scot