The Great Hall and the Battle of Flodden

We explore the connection between Stirling Castle’s Great Hall and the noblemen lost to one of the most disastrous battles in Scottish history.

9 September marks the anniversary of the Battle of Flodden in 1513, one of the most fateful battles in Scottish history. The coats of arms on the windows of The Great Hall here at Stirling Castle depict the nobles in the court of James IV. Many would have been lost at the Battle of Flodden, the last battle in British history where a monarch died. 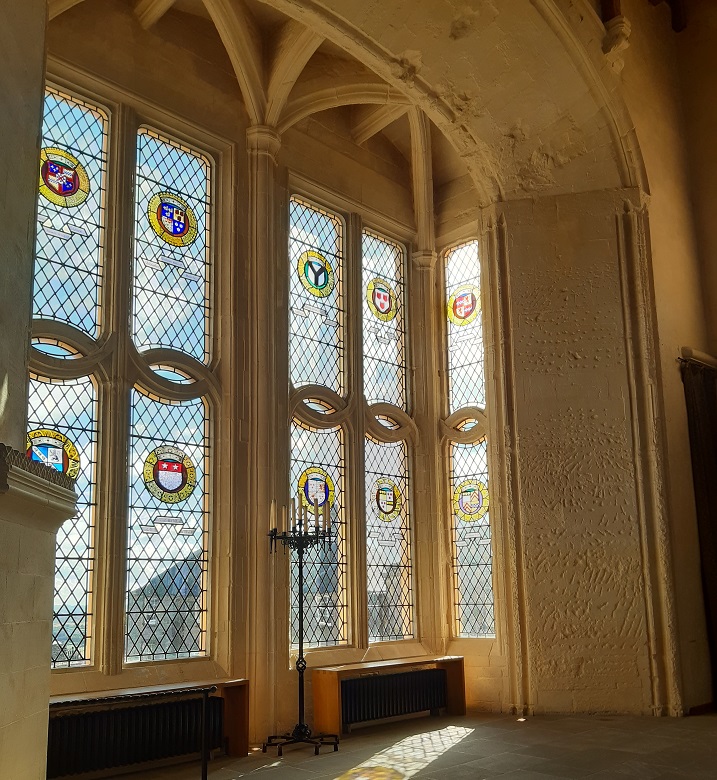 1513 Henry VIII was waging war in France. James IV of Scotland took the opportunity to support the Auld Alliance and invaded England. In Henry’s absence, Catherine of Aragon issued a warrant to raise an army against the Scots.

In early September the two armies came face to face in Northumberland. The Scots’ position was at Flodden Hill. Both sides were well matched both in numbers and the military technology of the day. The English guns, however, were smaller and more manoeuvrable in the muddy conditions than the heavy Scots culverins. Heavy bombardment forced the Scots to turn to the schiltron formation that had been so effective at Bannockburn – but they could not hold formation in the mud. Even the Scots’ new twenty-foot-long pikes were no match for the shorter English halberd in close quarter fighting. 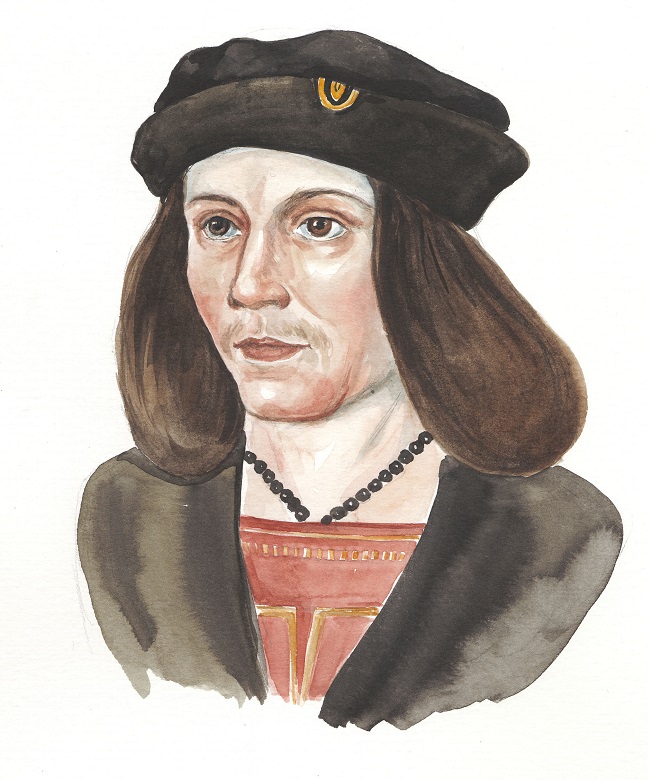 The numbers of Scottish losses are reported as being as high as ten thousand men – almost half the army (although those figures do come from English accounts). The deaths at Flodden would affect many Scots, from humble crofts to lowland manors. Position and status were no protection on the brutal battlefield. Even Ecclesiastical corridors and Royal palaces mourned the loss of their men.

Not only was the Scottish King killed but also nine earls, the Archbishop of St Andrews, the Bishop of the Isles and fourteen other lords of the realm. As the historian Michael Lynch says,

“The scale of the Flodden death toll, however, can outweigh the significance of the battle.”

James IV’s reign had proven him to be a decisive, forward thinking ruler. His court was a cosmopolitan affair. It included renowned figures, like the musician Robert Carver and the alchemist John Damien. James had pursued a great scheme of building which began with the Great Hall at Stirling and culminated in the raising of a navy. His flagship, The Great Michael, was bigger than Henry VIII’s Marie Rose at almost a thousand tons.

However, James’ death at Flodden plunged Scotland, yet again, into the position of a country with an infant king which was ruled by regents.

The Restoration of The Great Hall 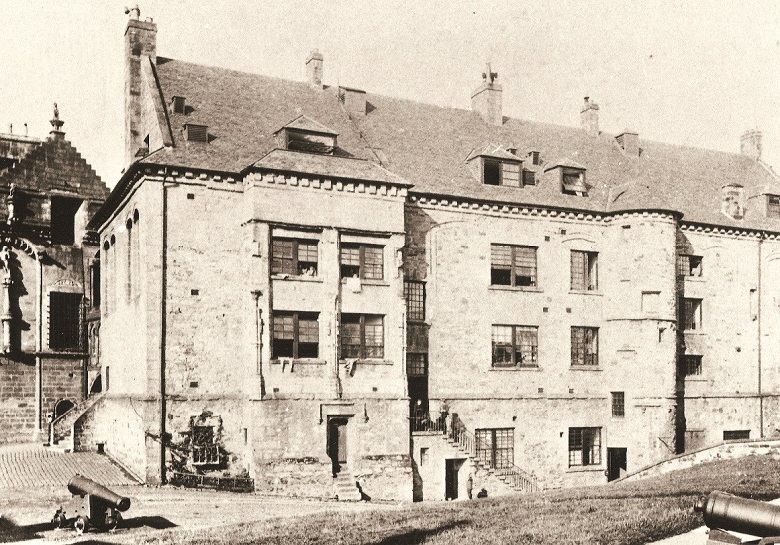 Fast forward almost 500 years to the restoration of the Great Hall, completed in 1999. The large bay windows were glazed with stained glass depicting the coats of arms of the noble families that were part of James IV’s court.

These windows allow as much light as possible to flood onto the Royal Dais. It’s a huge improvement to the basic sash windows that were fitted when the Hall was used as a barracks by the Argyll and Sutherland Highlanders.

The Coats of Arms

If we look at just a selection of the coats of arms on the windows, we can be taken back to Flodden and be reminded of the noble and influential lives that were lost.

Archibald Campbell had at one time been the Master of Royal Household. He went on to be Lord High Chancellor of Scotland. 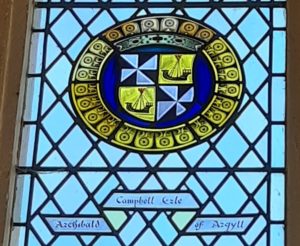 Adam Hepburn, 2nd Earl of Bothwell was father to Patrick. He was the Lord High Admiral of Scotland. 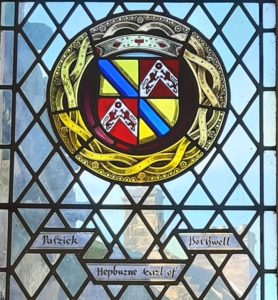 After the death of his first wife Matthew Stewart married Elizabeth Hamilton. She was the daughter of Mary Stewart, Princess of Scotland and daughter of King James II. 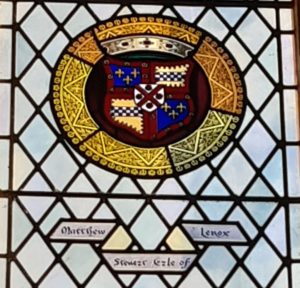 The son of Princess Joan of Scotland, daughter of James I and Lady Joan Beaufort. 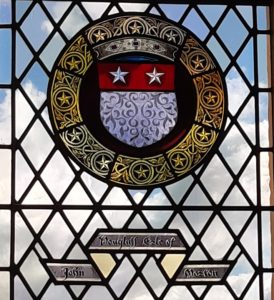 The second son of William 1st Earl of Caithness, who disinherited his oldest son for being a ‘wastrel’.  The 1st Earl was not only a prominent nobleman in the Scottish court but also in Norway. He was the last Jarl of Orkney, highest ranking noble in Norway. He also endowed The Collegiate Church of St Matthew, known as Rosslyn Chapel. 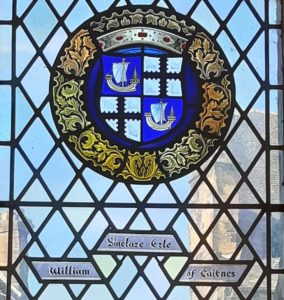 The Legacy of Flodden

There has been much discussion that James IV’s aim to establish a court that tried to be a Renaissance mix of new European fashions and more native traditions created an atmosphere of courtly honour. Was this chivalric culture to blame for the losses to the ruling classes at the Battle of Flodden? By having a noble class united by the ideas of knightly honour Scotland was able to raise the largest army ever to march on England. The resulting carnage inflicted on the Scottish establishment would live on in the Scottish consciousness.

The Flowers of the Forest

This lost generation would become known as the ‘Flo’oers o’ the Forest’. They were immortalised in folk ballads in 16th century, which were turned into songs with the lyrics of Jean Elliot in 1700s. The haunting tune has traditionally been played by a single piper and has been used as a requiem over the centuries. It’s said that a piper played the lament at Queen Victoria’s funeral.

It has also been used as a device in literature. Most famously it features in the Scottish classic Sunset Song by Lewis Grassic Gibbons (1932). Here it refers to the lost generations of the Great War.

On your next visit to Stirling Castle, marvel at the craftsmen who created the stained glass windows. But also spare a thought for all those who went from this hall into battle over the centuries and to all those generations lost – the ‘Flowers of the Forest’.