Did You Know?, History

Hello Europe, this is Stirling calling!

The history of Stirling Castle is teeming with connections to the rest of Europe.

You might have heard the stories of a possible 1st Century AD Roman fort or the rumours that James V kept a lion here, imported from Flanders.
You might even know that ‘Birdman of Stirling’ John Damien was originally from Italy. He famously tried (and failed) to fly to France by jumping from the castle walls in a suit of feathers. If you’re a fan of Stirling Castle, you probably also know that the impressively re-created tapestries hanging in the palace are based on a Flemish design.

For Heritage Awareness Day, join us as we explore some other connections to Europe which are less well known…

Back in 1495, King James IV nearly started a war when he took a rather questionable approach to international diplomacy.

It started when two Spanish ambassadors arrived at Stirling Castle in December for an audience with the King. They came to try to persuade James to abandon his plans to go to war with England. Instead, they wanted support for their own war against France. 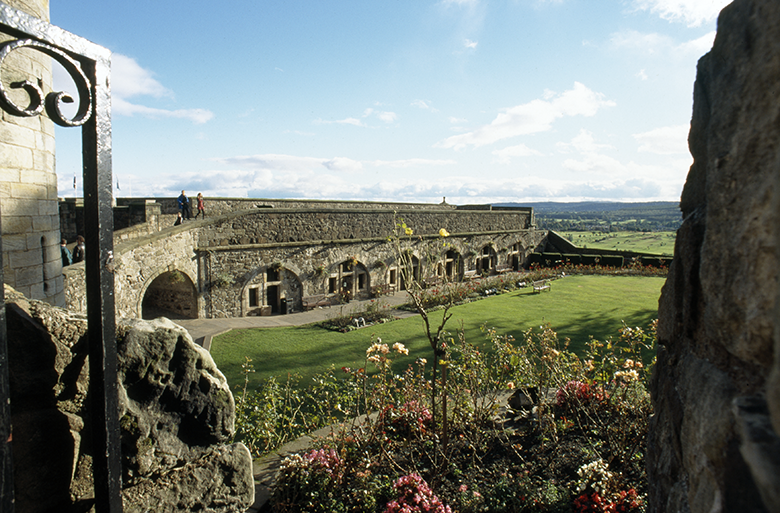 The gardens at Stirling Castle would have been far less inviting to the Spanish visitors in December 1495.

The ambassadors probably didn’t feel too welcome when they discovered their meeting with the King was to be held in the castle gardens, in Scotland, in December. But the cold was the least of their worries! James ignored their pleas and fiercely insulted his visitors. The report they took back to Spain’s monarchs was one long apology for the vitriolic language James used towards Spain.

Following this disastrous meeting, James stirred things up even more by inviting Perkin Warbeck, a Belgian pretender to the English throne, to Stirling Castle. This was a direct insult to Henry VII and his rule in England.

However, James’ aggressive diplomacy came to nothing. The subsequent Scottish invasion of England was quickly abandoned and Warbeck disappeared into obscurity. Stirling Castle had avoided becoming known as the place a Scottish King argued himself into a continental war.

Thankfully, most of the Castle’s connections with Europe are less fraught!

The famous Stirling Heads which decorate the ceiling of the King’s Inner Hall are thought to have a French connection? They were probably carved by a team of local craftsmen under the expert leadership of Andrew Mansioun, the French master carpenter of James V.

Originally, a set of 56 were commissioned in 1540. They are some of the finest surviving pieces of Scottish renaissance art, portraying Kings, courtly characters and great historic figures.

It seems that the heads were not an idea unique to James V and his carpenters. In the same year Sigismund I of Poland commissioned 194 carved wooden heads to adorn the ceiling of his castle at Wawel in Krakow. 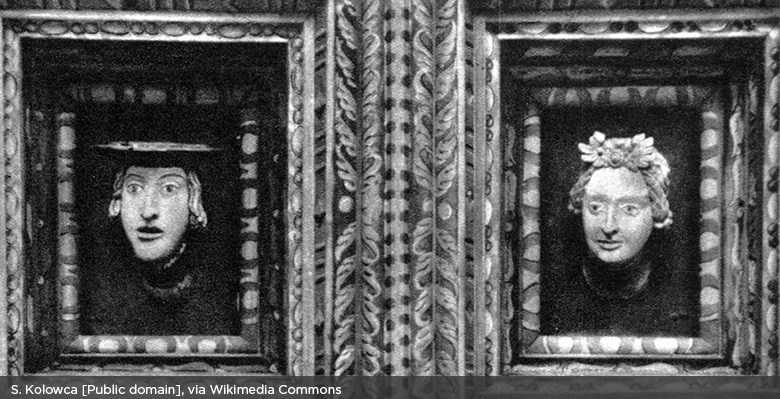 The Wawel heads look down on the Throne Room in Wawel Castle in Krakow.

Although similar to the Wawel Heads, the Stirling Heads are more in the style of caricatures.

Although the ceilings are very similar, there is one major difference between the Polish ceiling and the Scottish ceiling. The Wawel carpenter, Sebastian Tauerbach, preferred a Gothic style while Andrew Mansioun portrayed his figures as near caricatures.

No direct connections between the two sets have been found, but the similarities suggest that the carpenters at each court had a common source for their inspiration. This glorious ceiling shows James V’s desire to make Stirling a truly European Castle which kept up with the latest decorative art trends from the continent.

James V’s daughter, Mary Queen of Scots enjoyed a vibrant court life, accompanied by courtiers from all over Europe. 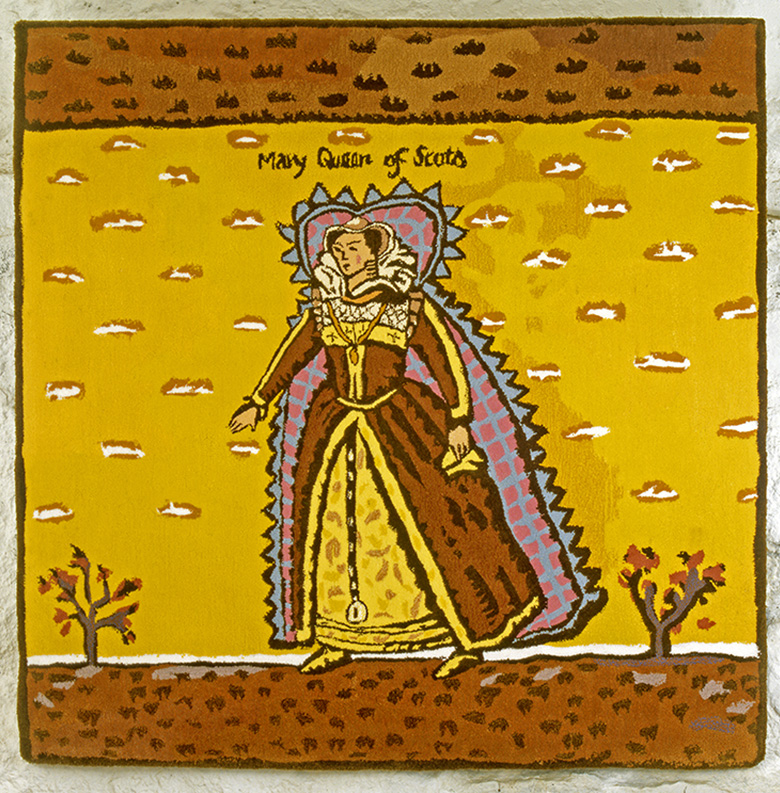 Mary Queen of Scots as depicted in a modern tapestry at Stirling Castle.

When it came to the baptism of her son, Prince James, in 1566, Mary turned to a French friend, Bastian Pagez, to organise a grand spectacle at Stirling Castle. He staged a celebration worthy of any royal house in Europe!

Servants dressed elaborately as Greek Satyr’s, with horses tails and ears, served the guests. Rumour has it that their attire offended the English guests. Apparently they thought the tails on the costumes referred to an old story that all Englishmen secretly had tails.

A mock battle was carried out where 28 “wildmen” were fought off by 15 German and Spanish soldiers.

The festivities concluded with fireworks imported from France, the first display of its kind recorded in Scotland. The Prince’s baptism at Stirling had been a triumph witnessed by ambassadors from all over Europe. Pagez was commended for his efforts by the Queen.

A year later, in 1567, Mary attended Pagez’s wedding. This was a great honour to bestow on her friend. However, could the celebration have provided an alibi for Mary? The wedding took place on the same night her husband Lord Darnley was murdered!

In 1579, James VI of Scotland met a Frenchman by the name of Esme Stuart in the Great Hall of Stirling Castle. The 13 year old king was reportedly very taken with Esme, seeing him as exotic and exciting. The King soon began giving him preferential treatment at court. Stuart was appointed to the Privy Council and made Duke of Lennox. 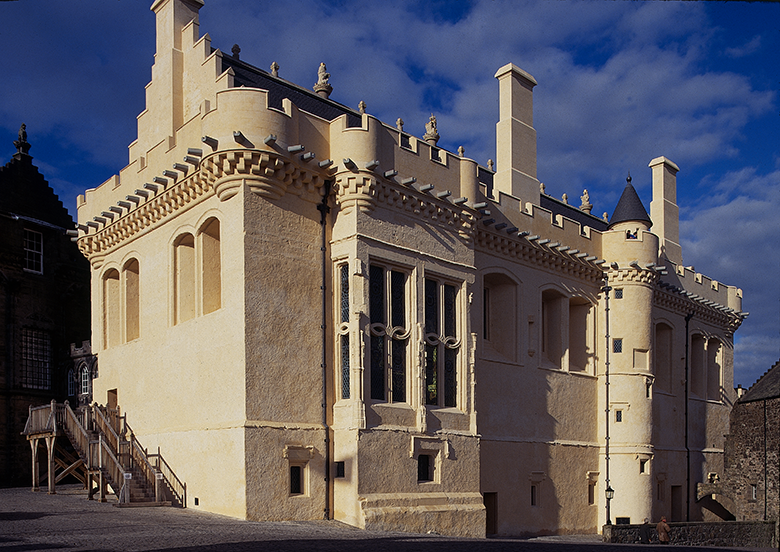 However, the relationship was not built to last. When Esme had the Earl of Morton beheaded for treason the Scottish nobles acted to oust him. The young King was held captive for ten months and forced to denounce Esme. The denunciation was read aloud at Stirling Castle in September 1582 with his “international intrigue” given a special mention.

To James’ dismay Esme was exiled and died in Paris a year later. His heart was taken back to the king in Scotland. James was left to find new favourites but a poem he later penned in Esme’s memory suggests he never forgot the man he had met at Stirling Castle.

There are many more connections between Stirling Castle and the rest of Europe and no doubt there are some we are yet to discover. Be it stories of visitors to the castle, great occasions or design influences, Stirling Castle would not be one of the focal points of Scotland’s cultural heritage without its links with Europe.

Join in the conversation on social media using the hashtag #ScottishConnections on Twitter and Instagram and celebrate Scotland’s historic and cultural connections with the rest of Europe.

About the author:
James Macivor works in the front of house team at Stirling Castle. He has a degree in history from the University of Stirling and runs a Twitter account on Scotland’s History.