More than it Seams

As the internet explodes over dress codes at this week’s Oscars, we take a look at the importance of dressing to impress at the castle’s Royal Court

Clothing has always played a part in conveying social, political and economic messages, from Ancient Rome to this week’s Oscars. It also reflects the technology and climate of the times. So we thought we’d look at the importance of dressing to impress in the castle court!

Fashion through the Ages

In Ancient Rome the toga was made using a vast amount of fabric, in some cases measuring twenty feet across. Such a huge quantity of fabric, as well as the difficulty of arranging such a complex garment, meant the toga was reserved only for the rich and upper classes.

In the Byzantine era, dress for the nobility was produced using samite. This was a thick silk into which gold threads would be sewn. Precious stones and pearls were also added to make garments even more ornate.

Things hadn’t changed by the sixteenth century, when throughout Europe rich silks were still in high demand. Velvet, fur and taffeta were highly favoured by the rich and noble too. 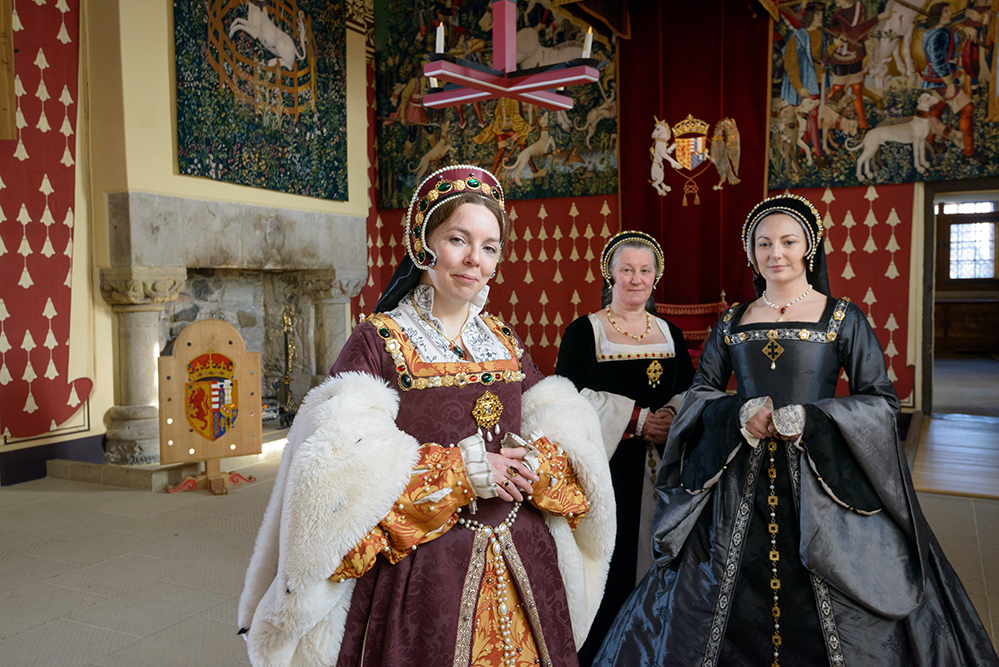 This was true for the Renaissance men as well as the women, none more so than King James V of Scotland. This king exemplifies the notion of dressing to impress.

He used clothing and jewellery to impress his courtiers at Stirling Castle. His outfits magnified his prowess, power and Royal status. They were also used to convey important political messages.

For instance, his clothing records list ‘Spanish’ cloaks that would be an appropriate choice of garment if wishing to impress a Spanish diplomat. Similarly French style garments were worn to impress or flatter his French visitors. 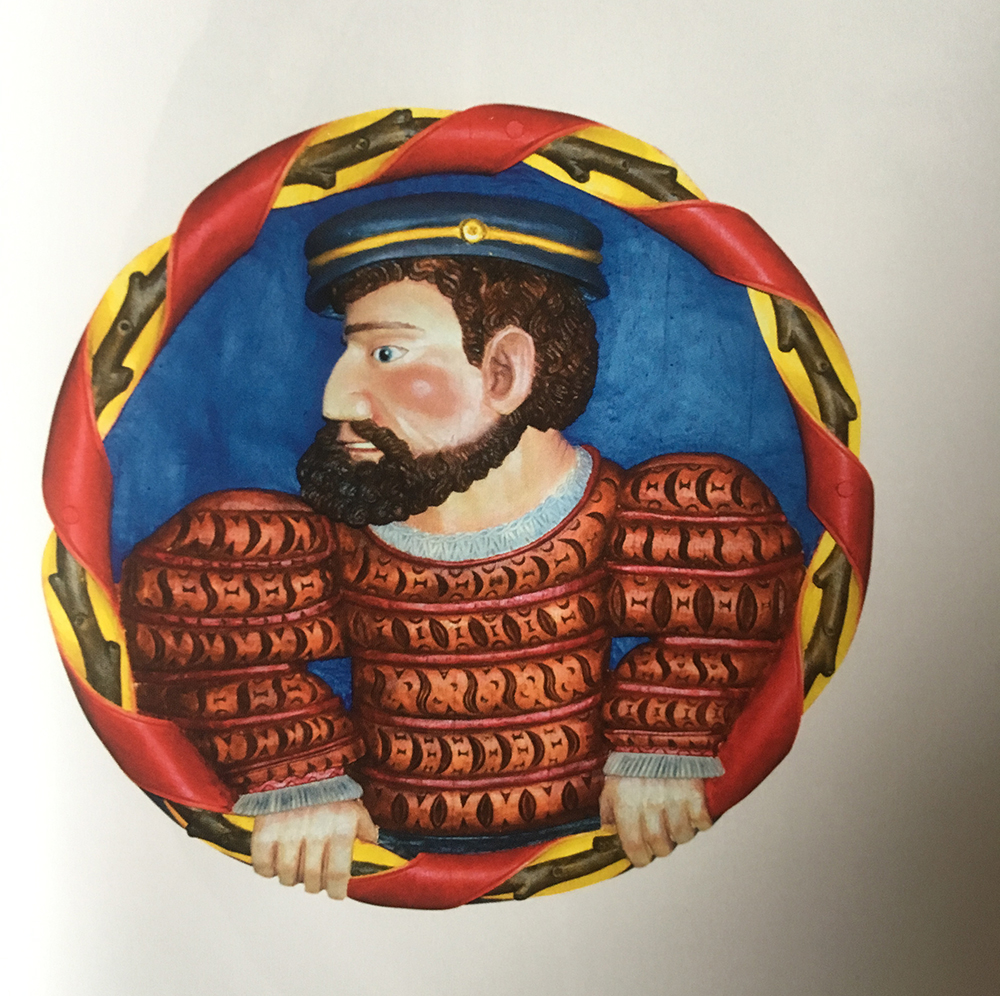 But it wasn’t just about power dressing politically. Clothing in James V’s era was about embellishing and altering the body, for both men and women.

For rich women, the style was to create a tiny waist using a bodice often made from whale bone. They would emphasise this by wearing a farthingale, a wood or wire bell-shaped cage underskirt worn over the hips.

Over this, the lady would wear:

By the 1580’s these lacy collars or ruffs had become so ostentatious that some even had to be held up using a wire frame. As you can imagine, none of these garments were particularly comfortable. Not to mention the fact that dressing and undressing would be impossible without help!

Costume for the men of this period was no less extravagant. Men like James V would wear:

It wasn’t just the women who contorted the natural shape of their bodies either. Men used to ‘bombast’ their clothing, padding and stuffing doublets and breeches with fleece and straw to enhance the shape and puff out the stomach.

Important messages about wealth and status weren’t just conveyed by clothing style – it was the fabrics too.

James V’s clothing inventories detail a robe made for the king in cloth of gold, with crimson satin lining and bedecked with 49,500 pearls!

Meanwhile Marie de Guise’s inventory lists gowns made from imported purple and crimson Venetian satin, and black velvet from the Italian city of Lucca. The queen wore black when mourning her husband’s death in 1542, but it wasn’t reserved only as a colour of mourning. It was hugely expensive to successfully dye a garment black, so the queen was displaying wealth and grandeur too.

Another popular feature of dress at this time was the process of slashing. This involved cutting slits into the outer fabric of sleeves and doublets, and pulling the lining through the slits to reveal the exquisite fabrics underneath.

Skirts were also split down the front from waist to hem, exposing more layers of ornate fabric underneath. All these methods of dress were about showing the world the fine and expensive fabrics the wearer possessed.

You can find exquisite examples of the dress of the king and queen in this era in the Palace Vaults here at Stirling Castle. You can see for yourself how ornately decorated and elaborate these garments were, as well where the fabrics came from. You can even try on a few gowns for yourself!

Our costumed interpreters throughout the Palace also dress in replicas of some of this splendid historical attire. They help us highlight that while the architecture is impressive, what really made the Palace so special was the people within it. 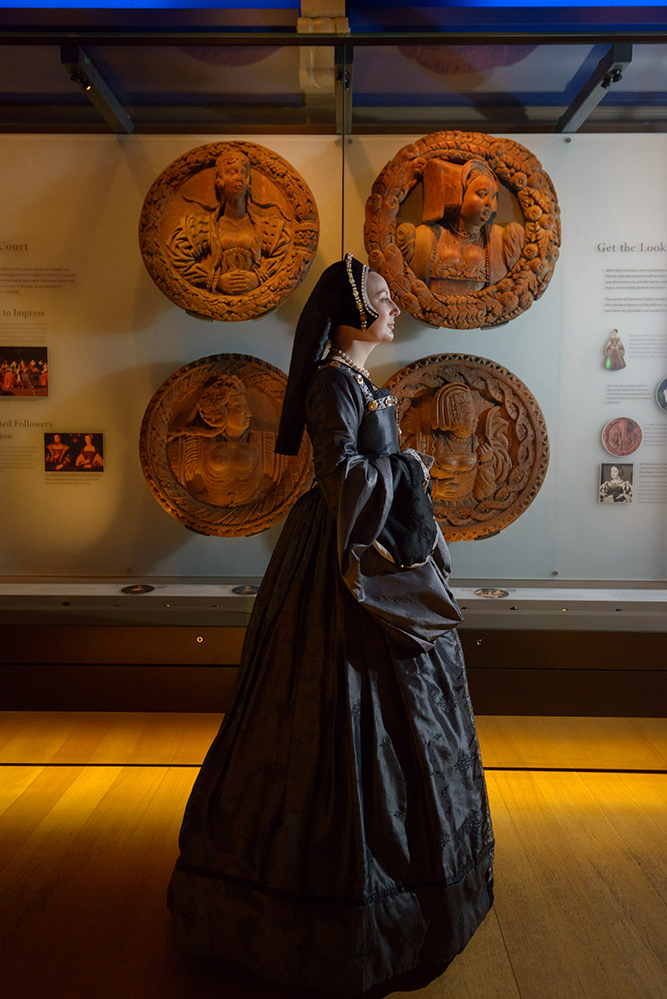 You can also see wonderful examples of these fashion styles in the Stirling Heads on the Palace ceiling. These 37 wooden carvings are replicas of portraits first commissioned by James V to display the people of his court and important figures in myth and history. It is a wonderful example of fashions of the time. You can see the rich colours, slashed sleeves, hoods, hats, doublets and embellishments influenced from all over Europe which makes it easy to imagine just how impressive these costumes would have been at court in their heyday.

Whether preserved in a wooden carving, depicted on a vase, or photographed on the internet today, looking back at fashion tells us a lot about the people lived who once lived in the castle. It also gives us an idea of the character of Stirling’s Royal court, and the type of messages they wanted to convey about power, wealth and status.

It seems to us that power dressing won’t ever go out of fashion!